Emmy award-winning filmmaker Susan Steinberg, MIRRORS TO WINDOWS: THE ARTIST AS A WOMAN, joined me Monday at 9:00am pst!

Did you miss today's show featuring Susan Steinberg?
Listen to our conversation here!

Susan Steinberg is an Emmy Award winning writer, director and producer best known for her work on PBS series American Masters. She has produced and directed documentaries on Paul Simon, Edward R. Murrow and the founder of Atlantic Records, Ahmet Ertegun. 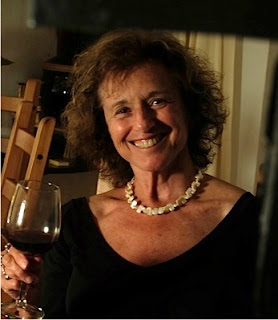 Since moving to London in 2004, Steinberg was drawn to the international and overwhelmingly female art scene. With her experience as a biographer, she set out to make a collective biography over the course of four years.

The result is a film about ten extraordinary artists: Mirrors to Windows: The Artist as Woman.

MIRRORS TO WINDOWS: THE ARTIST AS A WOMAN, the new feature documentary set in the vibrant London art scene, recently made its U.S. festival debut at the 11th Annual LA Femme International Film Festival on Saturday, October 17 at 8PM at the Laemmle Music Hall Theater in Beverly Hills.

Directed by Emmy award-winning filmmaker Susan Steinberg, MIRRORS TO WINDOWS: THE ARTIST AS A WOMAN follows the trajectories of three generations of women artists, ages 22 – 82, from the studio to the gallery, giving a rare insight into the lives of ten artists working across diverse mediums, united by an enduring belief in themselves and their work. While the artists hail from Egypt, France, Germany, Iran, the UK and United States, MIRRORS TO WINDOWS weaves their unique perspectives in art to tell the multi-faceted story of an artist’s life.

Filmed over a period of three years, director Steinberg takes the audience on a fast paced yet intimate journey behind the gallery walls to reveal the dynamic nature of this enigmatic calling. Taking advantage of both her 30- year career in documentary filmmaking and her training as a psychotherapist, Steinberg delivers a lively and attentive portrait of ten courageous and dedicated artists, who stories are universal.

“In ‘Mirrors to Windows’ my aim was to make an intimate film about an artist’s life, a film that would leave the audience feeling they were dropping into the artists’ studio," Steinberg says. "With ten main characters, this was not an easy task, yet those who have viewed the film have commented on its intimacy, which was accomplished by a long production schedule."

She spent three years filming characters in their studios preparing for and setting up their exhibitions and developing close relationships with each and every one of them. To create an environment that would lend itself to intimacy, for the first time she shot the studio material herself.

Susan Steinberg is an Emmy award-winning writer, director and producer, best known for her work on the PBS series “American Masters” where she produced and directed documentaries on Paul Simon, Edward R. Murrow and Ahmet Ertegun, the founder of Atlantic Records. She began her career as an editor on “Gimme Shelter” and on Robert Frank’s notorious film, “Cocksucker Blues.”

According to New Yorker Magazine writer and theater critic John Lahr: “Susan Steinberg has made a terrific, probing documentary about international female visual artists. She follows ten artists, well chosen both for their work ad their personalities, in a cunningly, well- organized fashion. It’s an extremely well-told, full length film that I admire.”