Shawn Kathryn Kane and Iris McAlpin joined me 9:00am today to talk about their short film PRO-ANA, which just made it debut in Los Angeles at the 11th Annual LA Femme International Film Festival

LOS ANGELES - PRO-ANA, a short film written by and starring Shawn Kathryn Kane and directed by Ward Roberts, will make its Los Angeles premiere in the upcoming 11th Annual LA Femme International Film Festival. The film, a searing look at the deadly condition known as “body dysmorphia”, will screen on Thursday, October 15 at the Laemmle’s Music Hall Theater in Beverly Hills at 2pm. 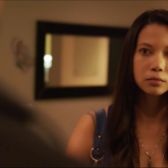 The Award of Merit winner for Film Short at the recent Accolade Global Film Competition and winner of Best Social Commentary at the Action on Film Festival, PRO-ANA tells the story of Dylan, a young woman caught in the downward spiral of anorexia, who seeks escape from the cult of pro-ana, whose adherents deify body dysmorphia and live by a strict doctrine of disordered eating. This lifestyle is guided by standardized rules, iconography and mantras like the Ana Creed:
I believe in Control...
I believe in perfection and strive to attain it.
I believe in salvation through starvation.
I believe in hell, because I sometimes think that I'm living in it.
For Dylan to recover and build a healthy new life she must lose everyone she cares for - even at the risk of her own life.

PRO-ANA was largely inspired by a-social media campaign #ThePowerWithin, a forum for body dysmorphics and disordered eaters in recovery. The film aims to shine a light on the growing and pervasive “pro-ana” subculture through a story of strength and self-reclamation.

Director Ward Roberts was stunned when he discovered the facts behind the subculture’s surge in popularity. “When Shawn sent along the shooting script for PRO-ANA, I was equal parts fascinated and horrified. The reality of such a community existing in today’s society seemed impossible,” says Roberts. “Body dysmorphia is a disease. A disease that needs a much greater understanding so those in its grip have the absolute best chance of breaking free. I hope this film will instill in its audience an awareness of pro-ana, leading to a constructive dialogue on how best to help those who are afflicted.”

Writer Kane agrees, explaining that “Pro-ana struck me very clearly as a religion, a cult more specifically, and that’s how it’s treated in our film. Body dysmorphia is a mental disorder. Logic doesn’t enter into it. It takes tremendous strength to decide to free yourself. Only then can you begin to recover. That is the story we wanted to tell.”

Shawn Kathryn Kane started acting and writing at the age of five. She's a graduate of New York University’s TISCH School of the Arts and the Atlantic Theater Company Acting School, currently studying with Ivana Chubbuck. Recent writing endeavors include The Young & The Restaurant, an Instagram "cellenovela," Apocalypse Wow, an hour-long comedy-drama series, and Noirmare, a short film that won the Grand Prize at its festival debut at Action on Film and continues to do well on the festival circuit.

Ward Roberts is the creative mind behind two critically acclaimed feature films and countless music videos, webisodes, short films and commercials. His hilarious yet disturbing cult smash feature film Dust Up with Amber Benson played in more than 20 cities and was released in more than 100 million homes via virtually
every major digital platform, as well as on DVD in major retailers. Ward’s first feature, Little Big Top starring the iconic Sid Haig, was released theatrically to rave reviews and is currently available on Amazon and Netflix as well as on DVD.

For more information on the film, please visit the website www.proanathefilm.com.