TV/Film Composer, musician, and producer Megan Cavallari joined me today at 9:30am pst! 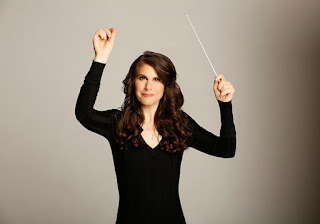 If you missed Megan Cavallari on today's show, listen here!

So, you think you had a busy day? Consider what a typical working day might be like for composer Megan Cavallari. Start with the fact that Cavallari is one of only a very small handful of women who have established themselves as major creative artists in the professional music industry. But not even most of the men can point to a resume as diverse, eclectic, and impressive as this diminutive Jewish-Italian Philadelphia native: more than a 100 film scores as performer, arranger, conductor, or composer; the official composer of the L.A. Kings for ten seasons; 25 television shows; 16 stage musicals; and hundreds of songs, jingles, and assorted musical offerings have earned her respect, acclaim, multiple professional awards, and a reputation as someone who seemingly creates and produces music in every waking moment of a 37 hour day.

Then consider that while music is the dominant focus of Megan Cavallari’s professional life, it’s probably the easiest thing she does. For kicks, she might suit up and play left wing in a men’s hockey league, where she might find herself hurtling over the ice after being checked by a guy twice her weight. Or, she might be dealing with the very real challenges facing her eleven year-old daughter, surviving life with debilitating juvenile arthritis. She might be at temple, reaffirming a faith that is part and parcel of a family legacy with all the drama of an HBO miniseries. Or she might be talking to children in a hospital’s terminal ward, recording their thoughts in private and open conversations – just because she knows those moments of free thought and reflection are all the more valuable to those with little time left. In short, your busy day has nothing on Megan Cavallari’s.

Cavallari sees a strong personal and spiritual component to her projects, beginning with a lesson learned from one of her early mentors and champions. “Danny Elfman used to say about making music, ‘you put the antenna up and you hope God is listening.’” Cavallari had just completed her master’s degree at NYU’s Tisch School of the Arts when she came to California with her award-winning musical project and caught the ear of Elfman. Her first high-profile gig was alongside Elfman as he composed and recorded the now-classic score from Tim Burton’s “The Nightmare Before Christmas,” which lead to work on several subsequent Elfman scores. She likewise worked with legendary film scoring artists Jerry Goldsmith and Edward Shearmur, and artists such as Johnny Mathis. “Music takes people into a very different space and realm, and engaging with that means I’m always full of new ideas.” She also confesses to a history of being in the right place at the right time, and being around the right people. “I’m super lucky – and then I surround myself with great musicians, producers, directors, and music supervisors who keep asking me to do things!”

The gritty dedication to teamwork also explains her passion for ice hockey, reflected in the many pieces of memorabilia that populate her recording studio as well as her passion for the Kings, who are more than just one of her many employers. “Hockey reminds me of life,” she explains. “You fall down hard, you get up. It’s poetry at eighty miles an hour, and it all comes down to getting that puck past that huge man into that tiny cage. There’s no star – you have to work as a team, you have to have those guys behind you, you have to have your line. I have my line in my work – my musicians, my agents – and my line has to be great for everything to work.”

That the work ethic is the product of strong, passionate parents shouldn’t be surprising, but the story of Megan Cavallari’s family offers additional perspective. Her Jewish mother’s family, emigrated from Russia and engaged as union activists, were targeted by the FBI and blacklisted during the McCarthy era (an uncle was called before congressional committees), which lead them to hide their Jewishness. Meanwhile, her Italian-born father was raised Catholic, but had rejected the church when he saw how they treated Italian Jews during World War II. “My father was more into Judaism than my mother,” Cavallari says. “Passover was his favorite holiday.” Learning prayers from her grandmother and great aunt, Megan wasn’t able to fully explore and embrace her traditions until she relocated to California after college. Despite the complex issues of religious identity, Cavallari’s parents excelled and exemplifying the better values of both faith and social responsibility – they were teachers who specialized in working with disadvantaged kids. “My parents had a loving relationship for 43 years, and I grew up in a home that was completely supportive,” she explains, citing a brother and sister who are both business owners “and fighters.”

That fight is needed on a daily basis when it comes to raising daughter Shoshana, who is in chronic pain from juvenile arthritis. “She’s suffering, but she has such a great attitude,” Cavallari observes, proud that her daughter will attend the prestigious Milken Community School next year. “She’s really my role model – kids tend to look at the bright side of things, so I learn a lot from them.” That’s one of the impulses that lead to Cavallari beginning the Talk Foundation Project. The idea is simple: with some simple digital recording technology, she visits with children in terminal health situations and simply allows them to talk. Currently engaging with Kaiser Permanente with specialists who work in childhood oncology, the recordings are simply private mementos of the subject’s life at that moment. “I say a prayer before I go into the room, I remind myself that this is for the good,” she says of the 20- to 30-minute conversations. “Some of these kids are happy, some are angry, some are going to rant or scream – but whatever they need to do, they do it.”

The constant demands for writing and producing music keep Cavallari focused, despite the many obstacles that she has faced. “Less than half-a-percent of composers are women,” she says. She recalls a particularly humiliating moment early in her career: an agent had submitted her as “M. Cavallari,” and she was hired based on her demo. But upon entering a production meeting, she was told that “casting was upstairs.” After explaining who she was, she was terminated because someone on the production insisted that only a man could compose the score for an action film. That’s lead to one of Cavallari’s bucket-list projects: “Someday, I want to do a ‘Mission: Impossible’ score with an all-female orchestra.” (Her other bucket-list gig would be working with fellow vegan Moby.)

Until then, Cavallari is hard at work on a new animated musical film project called “Jacob Marley” with director Russ Francis, with several other high-profile film gigs in development. She’s also begun a relationship with Grammy-nominated pop producer Eric Robinson, and is working with producer/composer Jonathon McHugh on a new opera about WWII hero Irena Sandler (who rescued 2500 Jewish children from the Warsaw Ghetto), which will debut with the Angel City Chorus. All projects to fill an ordinary day in the life of a not-so-ordinary composer.