Written and Directed by Leena Yadav 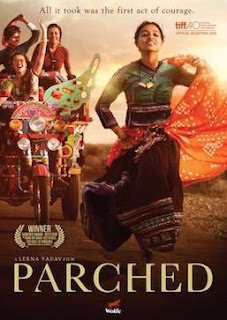 'Should resonate with audiences worldwide.' - VARIETY

This award-winning film is an evocative, vibrant drama of a three rural Indian women who begin to question the ancient traditions that hold them in servitude. One fateful night, the women come together and take a bold step that will change the trajectory of their lives forever.

With a bold visual confidence, filmmaker Yadav combines the stark realism of hostile desert landscapes with a Bollywood palette, vibrant tones that celebrate the unleashing of the women's repressed sensuality and dreams. Beautifully shot by Academy Award-winning cinematographer Russell Carpenter (Titanic), PARCHED elevates these women's heartfelt stories, transforming their struggles into a stirring portrayal of liberation.

Said writer/director Leena Yadav, "I was raised to judge and treat people as human beings above and beyond their gender, religion or caste. This story is my reaction to a misogynistic society that treats women as objects of sex, where their greatest role is to serve men. Giving my women characters a voice that observes, absorbs and reacts was what drove me to write this drama about ordinary women who are driven to extraordinary ends."

Distributed by: Wolfe Releasing
Trailer: https://vimeo.com/162697988
More Info: https://www.wolfevideo.com/products/parched/
RELEASE PLATFORMS:
PARCHED opens theatrically via Wolfe Releasing on June 17th in Los Angeles (Laemmle Music Hall), New York (AMC Empire 25) and the Bay Area (Cine Grand in Fremont and Camera 12 in San Jose).  The film will also be released via Wolfe Video on August 9th on DVD / VOD, across all digital platforms including iTunes, Vimeo On Demand, and WolfeOnDemand.com, and will also be available same date on DVD via Wolfe Video and many major retailers.

ABOUT THE DIRECTOR:
Born in Mhow, India, Leena Yadav is one of a vanguard of successful contemporary female directors working in India. She began her career as a successful editor on commercials and an assistant director for television, and then went on to direct for than 300 hours of television, including hit fiction shows and India's first reality TV show. She made her directorial debut with Shabd (2005), wich she wrote, edited and directed - and which bravely explores the psychology of love, marriage, creativity and freedom.  Then then write and directed Teen Patti (2010), starring two legends of cinema - Amitabh Bachchan and Academy Award Winner, Sir Ben Kingsley. Parched (2015), her third feature film, world premiered at the 2015 Toronto International Film Festival, and has garnered awards and critical acclaim in numerous festivals worldwide. It was deeply inspired by real life villagers she met and their resilient spirits.

ABOUT WOLFE VIDEO:
Founded in 1985 and now celebrating 30 years as the largest exclusive distributor of lesbian, gay, bi and transgender (LGBT) films, Wolfe's release slate includes some of the most popular LGBT films of 2015, including the Swiss Oscar and Golden Globes submission The Circle; the gorgeous lesbian drama by renowned Venezuelan director Fina Torres, Liz in September; and the epic international production by Finland's Mika Kaurasmäki, The Girl King. In 2016, Wolfe's releases will include the Thai Oscar submission How To Win at Checkers (Every Time); Henry Gamble's Birthday Party; Portrait of a Serial Monogamist, and Naz & Maalik. Wolfe's library of beloved modern classics includes such acclaimed hits as Cloudburst, Undertow, Desert Hearts and Big Eden. Wolfe's complete motion picture library can be found at WolfeVideo.com as well as at national retailers such as Netflix, Amazon and VOD destinations such as Comcast, Time Warner, Hulu, iTunes and WolfeOnDemand.com. Find more info online at http://www.wolfevideo.com.