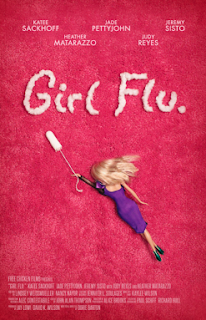 Bird, a thoughtful twelve-year-old, is becoming a woman whether she wants to or not. During the worst week of her life, she gets her first period (in front of her entire sixth-grade class), is ditched by her impulsive, free-spirited mom, and learns that you can never really go back to the Valley. Devastated that her childhood is over and still reeling from a recent move to Echo Park from Reseda, Bird struggles through her new reality along with some helpful, and some not-so-helpful, friends and family.
First-time writer/director Dorie Barton sets a lighthearted backdrop for this story of both a mother and daughter coming-of-age, offering a sweet perspective on a universal, yet underrepresented experience. We all have to grow up… and half of us do it by getting a case of the Girl Flu.
GIRL FLU’s impressive ensemble cast of Katee Sackhoff, Jeremy Sisto, Heather Matarazzo, and Judy Reyes all step into their roles beautifully. Newcomer Jade Pettyjohn is stunning as Bird, a girl struggling to cope with her sudden graduation to “womanhood.”


Runtime: 93 min
Please note you must receive a confirmation to be permitted on the press line
ABOUT THE LA FILM FESTIVAL
The LA Film Festival is a key part of the exhibition arm of Film Independent, showcasing new American and international cinema that embraces diversity, innovation and unique perspectives. The Festival produces one-of-a-kind events featuring critically acclaimed filmmakers, industry professionals and award-winning talent from Los Angeles and around the world. The Festival’s signature programs include the Filmmaker Retreat, Celebrating Women Filmmakers, Master Classes, Spirit of Independence Award, Coffee Talks, LA Muse and more. The Festival also screens short films created by high school students. Presenting Media Sponsor is the Los Angeles Times. Premier Sponsor is Peroni Nastro Azzurro and Principal Sponsor is Jaeger-LeCoultre. Platinum Sponsors are American Airlines, Dolby Laboratories, Inc., EFILM | Company 3 and HBO. The University Sponsor is Loyola Marymount University School of Film and Television. WireImage is the Official Photography Agency. More information can be found at lafilmfestival.com.
Posted by Get the Funk Out! at 7:33 PM