Alexandra Horowitz joined me at 9am PST to talk about her fascinating book, BEING A DOG: Following the Dog Into a World of Smell. 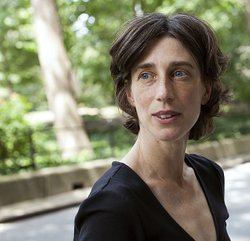 If you missed Alexandra Horowitz
on today's show, listen here!

Scribner is delighted to announce the publication, on October 4, 2016, of Alexandra Horowitz’s BEING A DOG: Following the Dog Into a World of Smell. In her New York Times bestselling Inside of a Dog (2009), Horowitz revealed the often surprising evolutionary reasons behind why dogs behave the way they do; in BEING A DOG, she explores what dogs know in even greater depth, following their lead to learn about the dog’s spectacular nose and how we mere humans can improve our under-used sense of smell. The result is a revelation about the world that we share. 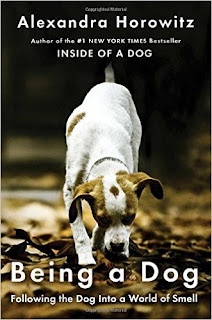 In BEING A DOG, readers will learn how well a dog can smell versus how well a human can smell. We humans are what Alexandra and her fellow scientists call microsmatic, i.e. “poor smellers,” compared to dogs. We have a mere six million olfactory receptor cells in our noses, whereas dogs have between 200 million and a billion, depending on the breed. Here’s another comparison: Human beings have three receptor genes that allow us to see all the colors of the world. Dogs have some 800 receptor genes just for smell. In theory, they can smell billions of different odors. We therefore have a very difficult time understanding what dogs can do with their noses because most of us can’t even tell if what burnt in the kitchen this morning was the coffee or the toast.

So what, exactly, can dogs smell? Amyl acetate is the chemical that gives bananas their smell. Dogs can smell one drop of the chemical in a trillion drops of water. Dogs smell earthquakes before they happen, and rainstorms miles away. They have been trained to find explosives, land-mines, chemical accelerants, missing people, underwater cadavers, drugs of every type, counterfeit goods, illicit cell phones in prison and imported shark fins in suitcases, dry rot, termites, fire ants, bed bugs, truffles under the ground, and dairy cows in estrous. They smell what you had for breakfast and whether a cat touched your leg yesterday. They can smell cancer, both inside human beings and in lab samples. They can smell their way home, the time that has passed since a flower closed up, and the body under the rubble.

BEING A DOG delves into all of these remarkable abilities and more, revealing a whole world of experiences we miss every day. Horowitz, inspired by her dogs, tries to be a better smeller. She spends days smelling everything her dogs smell. And she volunteers at an olfaction lab at Rockefeller University (sniffing hundreds of bottles of scents per session.) It is not that we humans can’t smell; it’s that we largely don’t. Based on the biological facts alone, the major determining factor in whether we smell an odor or not seems to be just this: whether we bother to try and smell it.

Writing with scientific rigor and her trademark wit, Horowitz changes our perspective on dogs – and smelling – forever. Readers will finish this charming and informative book feeling that they have broken free of human constraints and understood smell as never before; that they have, however fleetingly, been a dog.

Alexandra Horowitz is the author of the #1 New York Times bestseller Inside of a Dog: What Dogs See, Smell, and Know and On Looking: A Walker’s Guide to the Art of Observation. She teaches at Barnard College, where she runs the Dog Cognition Lab. She lives with her family and two large, highly sniffy dogs in New York City.


More praise for BEING A DOG:

“I’m not entirely certain whether Alexandra Horowitz’s BEING A DOG has made me want to buy a dog or morph into one—but I do know that it was magical. Horowitz has crafted an utterly engrossing, witty, finely-observed narrative that will make you look at the power of the nose in a wholly new way.”—Maria Konnikova, author of The Confidence Game and Mastermind: How to Think Like Sherlock Holmes
Posted by Get the Funk Out! at 5:49 AM