PAUL BRINKLEY-ROGERS, Pulitzer-prize winning war correspondent and author of PLEASE ENJOY YOUR HAPPINESS, joined me Monday at 9am PST! 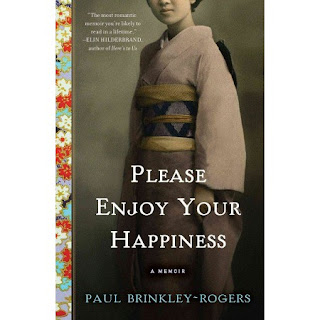 PLEASE ENJOY YOUR HAPPINESS, Pulitzer-prize winning war correspondent PAUL BRINKLEY-ROGERS is a gorgeous and evocative memoir that has captured the hearts and minds of our staff and the booksellers who have received an early glimpse of his pages recounting a haunting love affair with a mysterious older Japanese woman in the summer of 1959.

If you missed Paul Brinkley-Rogers on today's show, listen here!

“Please enjoy…the most romantic memoir you’re likely to read in a lifetime.”
—ELIN HILDERBRAND, New York Times bestselling author of HERE’S TO US


“A moving memoir exploring the last imprint of his first love.”—THE LADY (UK)


At age 75, Paul began writing PLEASE ENJOY YOUR HAPPINESS after discovering his long-lost love’s letters tucked inside a book by a British poet he had not opened in years. When he reread her passionate epistles—which are also featured verbatim in his memoir—he set out to recapture this singular time and place, his coming-of-age as a 19-year-old sailor aboard the USS Shangri-La, and to pay tribute to Kaji Yukiko, the incredible woman who continues to influence his life long after they parted more than half a century ago.

Paul and Yukiko met by chance in the Japanese seaport of Yokosuka. Picking him out of a crowd because he was carrying a book, she shared her astonishing knowledge of literature, music, film, and poetry with him and encouraged—even demanded—that he use the talent she saw in him to become the writer he is today. Through Yukiko, he discovered a shared passion for the arts and learned many heartbreaking truths about post-war Japan. He also learned what it takes to love without regret.

Theirs was not a quiet love story. When a member of the yakuza, Japan’s brutal crime syndicate, attempted to kidnap Yukiko, Paul realized that there was much more to her—and to Japan in the devastating wake of World War II—than he saw at first glance. Through the searing letters that Yukiko wrote to him and his vivid telling of a history made all the more powerful by the passage of time, PLEASE ENJOY YOUR HAPPINESS reaches across decades and continents, inviting readers to reclaim and celebrate the lifelong loves that never really end.

PLEASE ENJOY YOUR HAPPINESS has quickly become an in-house favorite and is all the more personal to us because the beautiful image on the cover is a photo of the mother of Tara Parsons, Touchstone’s Editor-in-Chief (and the book’s editor). The photo of Parsons’ mother dressed in a formal kimono was taken in Japan during the same time period in which PLEASE ENJOY YOUR HAPPINESS is set.

Paul Brinkley-Rogers is a Pulitzer Prize-winning journalist and veteran war correspondent. For many years he worked in Asia as a staff member of Newsweek, covering the wars in Vietnam and Cambodia, the death of Chairman Mao, and Japan's economic miracle. He also reported from Latin America for The Miami Herald, sharing the Pulitzer Prize with a reporting team in 2001 for coverage of the Elian Gonzalez custody battle. He is the author of Please Enjoy Your Happiness, a memoir. Now retired, he lives in Arizona.
Posted by Get the Funk Out! at 7:53 PM