Deni Ellis Béchard, author of Into the Sun, joined me Monday at 9:45am PST 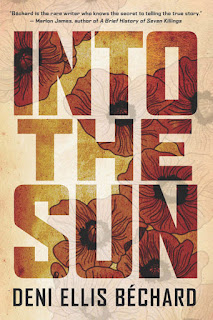 Kabul—Ten Years After 9/11: After a car explodes in the city, a Japanese-American journalist discovers that its passengers were acquaintances—three fellow expats who had formed an unlikely love triangle—and becomes convinced that a deeper story lies behind the moment of violence. The investigation that follows takes the journalist from Kabul to Louisiana, Maine, Québec, and Dubai, from love to jealousy to hate—and acutely reveals how the lives of individuals overseas have become inseparable from the larger story of America’s imperial misadventures.

Deni Ellis Béchard is the author of the novel Vandal Love, winner of the 2007 Commonwealth Writers’ Prize for Best First Book; Cures for Hunger, a memoir about growing up with his father, who robbed banks; and Of Bonobos and Men, winner of the 2015 Nautilus Book Award for investigative journalism. His work has appeared in numerous magazines and newspapers, including the LA Times, Salon, Pacific Standard, and Foreign Policy, and he has reported from India, Iraq, Colombia, Rwanda, the Congo, and Afghanistan.