LISTEN to Janeane's conversation with Gretchen Carlson about her NEW book, "Be Fierce - Stop Harassment and Take Your Power Back." 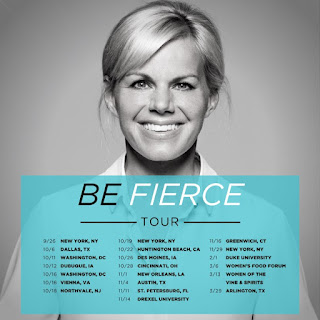 The former Fox News Anchor will open up about her sexual harassment experiences in the workplace and present strategies for dealing with this behavior.

The following is from
https://www.gretchencarlson.com/befierce

About Be Fierce:
When Gretchen Carlson made the decision to "walk off the set" and speak up about sexual harassment in the workplace, she jumped off a cliff by herself, but it led to a new calling: empowering women to reclaim their power against any injustice.
After the former Miss America, mother of two, and star news anchor stood up, and spoke out, women all over the world joined the movement and began to take back their lives, careers, and dignity. Gretchen became the voice for the voiceless. BE FIERCE shares Gretchen’s experience and powerful stories from the thousands of women who have reached out to her who refuse to submit to intimidation of any kind. Gretchen will also share the wisdom and research of lawyers, psychologists, and other experts helping to confront this problem and advance what has become an international conversation about women refusing to shut up and sit down.

About the Author:
Named one of TIME magazine’s 100 most influential people in the world for 2017, GRETCHEN CARLSON is one of the nation's most successful and recognized news anchors and a tireless advocate for female empowerment. She’s also graced the cover of Time and Good Housekeeping magazines and is a marquee columnist for Time's Motto. Since making the decision to speak up against sexual harassment, she sparked an international conversation about the pervasiveness of the issue and in doing so discovered every woman has a story.

In this candid memoir, celebrity news anchorwoman Gretchen Carlson shares her inspiring story and offers important takeaways about what it means to strive for and find success in the real world. With warmth and wit, she takes readers from her Minnesota childhood, when she became a violin prodigy, through attending Stanford and later rising to anchor of The Real Story with Gretchen Carlson on Fox News after working her way up from local television stations.

Carlson addresses the intense competitive effort of winning the Miss America Pageant, the challenges she’s faced as a woman in broadcast television, and how she manages to balance work and family as the wife of high-profile sports agent Casey Close and devoted mother to their two children. An unceasing advocate for respect and equality for women, Carlson writes openly about her own struggles with body image, pageant stereotypes, building her career, and having the courage to speak her mind. Encouraging women to believe in themselves, chase their dreams, and never give up, Carlson emerges in Getting Real as a living example of personal strength and perseverance.

“In 1989, Gretchen Carlson was chosen to be Miss America—I was one of the judges who picked her! Since then, I have watched Gretchen grow as a journalist and as a woman, proving that beautiful women can be smart and that working women can be good moms. In Getting Real, Gretchen writes frankly and with humor about the challenges she's met along the way. We can't all be Miss America, but we can all learn from Gretchen how to confront whatever comes our way and come out winners.”
—Deborah Norville, anchor of “Inside Edition” and author of Thank You Power

"Finding success in life comes after some failures and a lot of hard work. Watching Gretchen succeed inspires me and will inspire all women: she seized the day, made the most of her talents, and never, ever gave up."
—Vanessa Williams, Singer, Actress, and New York Times Bestselling Author