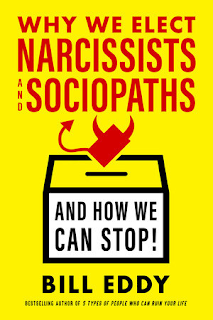 WHY WE ELECT NARCISSISTS AND SOCIOPATHS – AND HOW WE CAN STOP! (on sale May 21) by clinical social worker and veteran mediator Bill Eddy. In this invaluable guide to identifying dangerous personalities in politics, the world’s leading authority on high-conflict personalities explains how these politicians often capture 40% of the vote while dividing the majority – and what we can do to prevent this from happening.

Arguing that it is personality - not politics - that allows high conflict individuals to obtain positions of power, Eddy addresses a previously unidentified phenomena that poses a threat to our world and offers insightful advice for anyone seeking to make better choices at the polls.

Bestselling author, therapist, lawyer, and mediator Bill Eddy describes how dangerous, high-conflict personalities have gained power in governments worldwide–and what citizens can do to keep these people out of office.

Democracy is under siege. The reason isn’t politics but personalities: too many countries have come under the sway of high-conflict people (HCPs) who have become politicians. Most of these high-conflict politicians have traits of narcissistic personality disorder, antisocial (i.e., sociopathic) personality disorder, or both. This is the first and only guide for identifying and thwarting them.

HCPs don’t avoid conflict, they thrive on it, widening social divisions and exacerbating international tensions. Eddy, the world’s leading authority on high-conflict personalities, explains why they’re so seductive and describes the telltale traits that define HCPs–he even includes a helpful list of forty typical HCP behaviors.

Drawing on historical examples from Hitler, Stalin, Mao, and Nixon to Trump, Maduro, and Putin, Eddy shows how HCPs invent enemies and manufacture phony crises so they can portray themselves as the sole heroic figure who can deal with them, despite their inability to actually solve problems. He describes the best ways to expose HCPs as the charlatans they are, reply to their empty and misleading promises, and find genuine leaders to support. Eddy brings his deep psychotherapeutic experience to bear on a previously unidentified phenomena that presents a real threat to the world.

Bill Eddy is a lawyer, therapist, mediator and the co-founder and Training Director of High Conflict Institute. He developed the High Conflict Personality theory (HCP Theory) and has become an international expert on managing disputes involving high conflict personalities and personality disorders. He provides training on this subject to lawyers, judges, mediators, managers, human resource professionals, businesspersons, healthcare administrators, college administrators, homeowners’ association managers, ombudspersons, law enforcement, therapists and others. He has been a speaker and trainer in over 30 U.S. states and 10 countries.

As an attorney, Bill was a Certified Family Law Specialist in California and the Senior Family Mediator at the National Conflict Resolution Center in San Diego. Prior to becoming an attorney in 1992, he was a Licensed Clinical Social worker with twelve years’ experience providing therapy to children, adults, couples and families in psychiatric hospitals and outpatient clinics. He has taught Negotiation and Mediation at the University of San Diego School of Law for six years and he is on the part-time faculty of the Straus Institute for Dispute Resolution at the Pepperdine University School of Law and the National Judicial College. He is the author of numerous articles and several books.
Posted by Get the Funk Out! at 12:21 PM