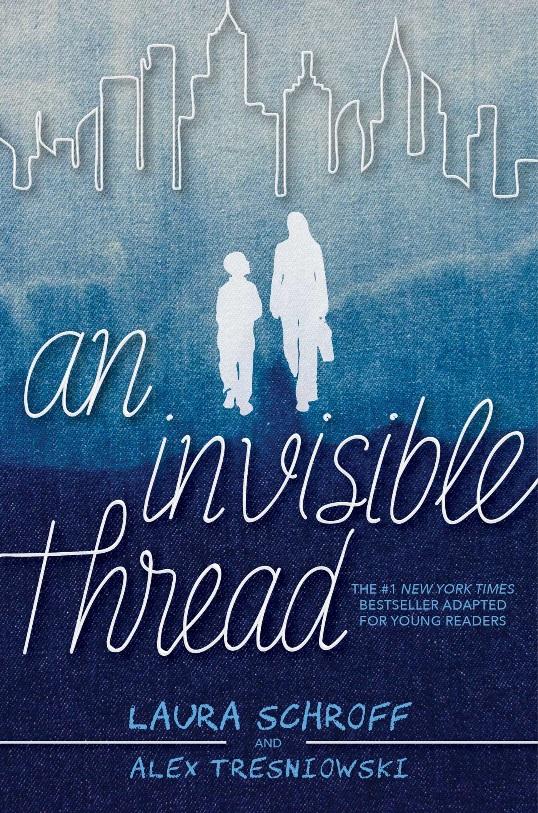 “An Invisible Thread is like The Blind Side, but instead of football, it’s food. These are two people who were brought together by one simple meal, and it literally changed the course of both of their lives. This is a must-read . . . you can read it in a day because it’s impossible to put down. If you read it and find it as moving as I did, pay it forward: buy a copy and give it to a friend.” – Rachael Ray, host of The Rachael Ray Show


“If you have a beating heart—or if you fear you’re suffering a hardening of the emotional arteries—you really ought to commit to this book at the earliest possible opportunity . . . read this book. And pass it on. And encourage the next reader to do the same.”


From #1 New York Times bestselling authors Laura Schroff and Alex Tresniowski comes the young readers edition of an inspirational memoir about an unlikely friendship between a busy sales executive and a homeless eleven-year-old boy.

One Monday afternoon, on a crowded New York City street corner, eleven-year old Maurice met Laura and asked for spare change because he was hungry. Something made Laura stop and offer to take Maurice to lunch. They met for dinner on the following Monday, and the Monday after that, and wound up getting together on m0re than 100 Mondays, forging an unlikely friendship that changed both their lives forever.

Based on the true story of Laura Schroff and Maurice Mazyck, An Invisible Thread chronicles the bond between an eleven-year-old boy and a busy sales executive; a heartwarming journey of hope, kindness, adventure, and love—and the power of fate to help us find our way.

ABOUT THE AUTHORS
Laura Schroff is a former advertising executive who helped launch three of the most successful start-ups in Time Inc. history— In Style, Teen People, and People Style Watch. Schroff has also worked as the New York Division Manager at People magazine. Since the release of An Invisible Thread, Schroff has been a keynote speaker at over 300 schools, libraries, charities and bookstores, encouraging people to find for their own invisible thread connections and appreciate the power of small acts of kindness. Lives in Westchester, NY

Alex Tresniowski is a former human-interest writer at People and the bestselling author of several books. His other titles include An Invisible Thread, Waking Up in Heaven, and The Light Between Us.


WATCH the interview on the TODAY show: https://www.youtube.com/watch?v=I7BrnbjMmyI


“[A] complex and unswervingly honest story about a woman and a boy who saved each other. By its raw honesty and lack of excess sentimentality, it is even more inspirational. This is a book capable of restoring our faith in each other and in the very idea that maybe everything is going to be okay after all.”

– Catherine Ryan Hyde, author of Pay It Forward and Jumpstart the World


“An Invisible Thread—a remarkable story, told so beautifully and honestly—shows us what’s possible when we are not afraid to connect with another human being and tap into our compassion. It is a story about the power each of us has to elevate someone else’s life and how our own life is enriched in the process. This special book reminds us that damaging cycles can be broken and not to neglect the humanity of the strangers we brush up against every day.”

– Chris Gardner, bestselling author of The Pursuit of Happyness


“This is one of the most touching and refreshing and inspiring stories I have read in a long time. If you had made this story up, I wouldn’t have believed it, but it’s true. We all need something to inspire us, and I promise you, this book will make you want to stand up and do something nice for people. What a wonderful and needed story for all of us.

An Invisible Thread is fantastic.”


“This book is a game-changer . . . each chapter touches your heart. An Invisible Thread is a gift to us all. America needs this book now more than ever.”