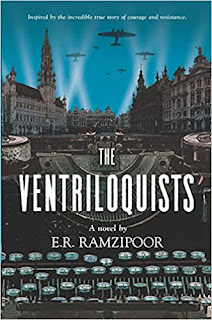 In our own age of “fake news” and social media blitz-storms, and with real journalism under constant siege, it is important to remember the role propaganda plays promoting both right and wrong at crucial moments in history. When first time novelist E.R. Ramzipoor discovered the forgotten story of a satirical anti-Nazi newspaper created and distributed by the Resistance in occupied Belgium she knew she had hit upon a story with both historical significance and contemporary resonance. Her dazzling debut, The Ventriloquists (Park Row Books; August 27, 2019) brings riveting tension and surprising humor to this little known chapter of World War II history as she “reminds us that so much of what we read, hear and watch is propaganda—for someone, for some organization, some country” (Heather Morris, #1 New York Times bestselling author of The Tattooist of Auschwitz).

Brussels, 1943. The Nazi occupiers have hatched a plan to turn the resistance newspapers into Nazi propaganda mouthpieces that will sway public opinion against the Allies. To do so, they conscript key members of the Front d’Indépendance to carry out their dirty work, and the ragtag band of misfits have little choice if they wish to escape death. But then rogue journalist Marc Aubrion has a brilliant notion: turn the tables and create a fake edition of Le Soir that not-so-subtly mocks Hitler and the oppressors who have overrun Europe. That is a joke worth dying for—and the Ventriloquists have less than three weeks to pull it off.

“I first ‘met’ the original ventriloquist, Marc Aubrion, in my senior year at UC Berkeley,” Ramzipoor recalls. “While doing archival research for my thesis on underground literature. I came across a document written by five women who worked for the Office of War during World War II... ‘The patriots seem to take delight in including the Germans on their distribution routes. To get a wider public among the Germans, the patriots insert articles in the German-controlled press or manage to fake a whole edition….’ Further research revealed that the Belgians wrote and distributed this paper in only eighteen days. A writer, Marc Aubrion, orchestrated the most elaborate feat of satire the Europe has ever seen: the grandchild of Voltaire and the ancestor of Improv Everywhere.”

In this triumphant debut inspired by true events, a ragtag gang of journalists and resistance fighters risk everything for an elaborate scheme to undermine the Reich.
The Nazis stole their voices. But they would not be silenced.

Brussels, 1943. Twelve-year-old street orphan Helene survives by living as a boy and selling copies of the country’s most popular newspaper, Le Soir, now turned into Nazi propaganda. Helene’s world changes when she befriends a rogue journalist, Marc Aubrion, who draws her into a secret network that publishes dissident underground newspapers.

The Nazis track down Aubrion’s team and give them an impossible choice: turn the resistance newspapers into a Nazi propaganda bomb that will sway public opinion against the Allies, or be killed. Faced with no decision at all, Aubrion has a brilliant idea. While pretending to do the Nazis’ bidding, they will instead publish a fake edition of Le Soir that pokes fun at Hitler and Stalin—daring to laugh in the face of their oppressors.

The ventriloquists have agreed to die for a joke, and they have only eighteen days to tell it.

Featuring an unforgettable cast of characters and stunning historical detail, E.R. Ramzipoor’s dazzling debut novel illuminates the extraordinary acts of courage by ordinary people forgotten by time. It is a moving and powerful ode to the importance of the written word and to the unlikely heroes who went to extreme lengths to orchestrate the most stunning feat of journalism in modern history. 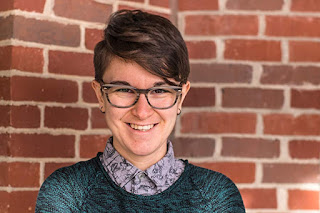 ABOUT THE AUTHOR
E.R. Ramzipoor is a writer based in California. She also works as a content marketer, writing about cybercrime and online fraud. She studied political science at UC Berkeley. Her writing has been featured in McSweeney’s and The Ventriloquists is her first novel.

“Art and artifice, life and death, collide powerfully in The Ventriloquists,” says Pam Jenoff, New York Times bestselling author of The Orphan’s Tale. “E.R. Ramzipoor has made an unforgettable and important contribution to the canon of Holocaust literature.” “A compelling historical thriller.... Engrossing,” says Booklist in a starred review.
Posted by Get the Funk Out! at 5:01 PM