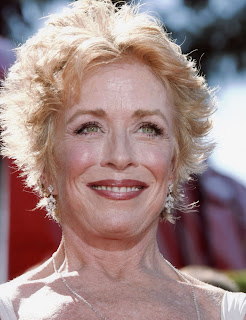 Iconic actress Holland Taylor has endeared our hearts for decades with diverse roles on the Broadway stage, television and film. Adored in “Bosom Buddies,” “The Practice,” and “Two and a Half Men,” along with blockbuster films “Legally Blonde” and “The Truman Show,” she is a beloved talent we all relate to.

Now the Emmy Award winning actress will reveal her truest character, herself, as a featured guest of “The Inner View,” hosted by Dr. James Mellon at Global Truth Center Los Angeles Friday, September 6 at 7:30pm. 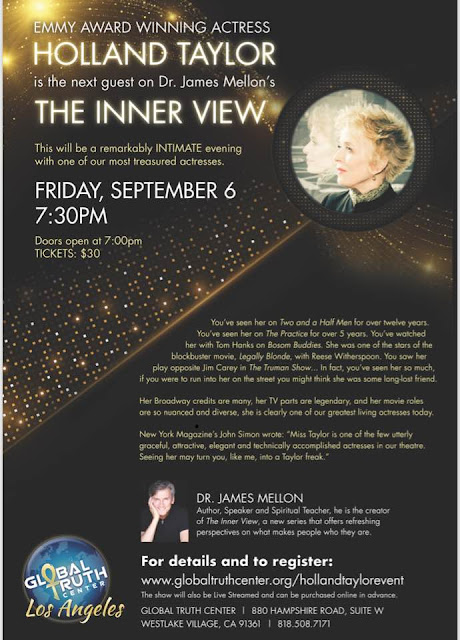 In today’s world of sound bites and viral memes, “The Inner View” offers an intimate exchange where real conversation reveals the truth of who we are. The show’s host, Dr. James Mellon, actor, author, composer, and founding Spiritual Director of Global Truth Center Los Angeles says, “I’m interested in discovering how Holland got to be who she is today.” With provocative, emotional, sometimes hilarious, and always entertaining perspectives, he brings stories to light.

Holland Taylor’s life story is not unlike her eclectic acting career. New York Magazine said “Miss Taylor is one of the few utterly graceful, attractive, elegant and technically accomplished actresses in our theatre.” As a playwright, she wrote and starred in “Ann,” earning a Tony nomination for her portrayal of Governor Ann Richards of Texas. Taylor has also shared the screen with Tom Hanks, Reese Witherspoon, Tina Fey, Nicole Kidman, and Jim Carey, among others. She holds a master’s degree in Spiritual Psychology. As a gay woman in a male dominated industry, she shares a relationship with an actress 30 years her junior.

The evening’s “The Inner View” topics will be unbridled, touching upon the grace of aging in a modern world, success in a changing business, sexuality, relationships, and whatever comes up!

Tickets for an intimate evening of discovery are $30. They can be purchased upon arrival or in advance at globaltruthcenter.org The show will also be offered on live stream. Doors open at 7:00pm. Show begins at 7:30pm.

*Global Truth Center Los Angeles is a place where all are welcome, sharing the belief we are One people living on One planet. With the goal to create a safe and sacred place where an individual can discover his or her own spiritual path and personal purpose in life, the Center honors the love inherent in all of humankind, bringing us a commonality of Spirit and Soul.

ABOUT HOLLAND TAYLOR
The New Yorker has called Holland Taylor "the first vaudeville Gentile we ever saw." Her New York stage performances include Bess in Breakfast with Les and Bess, the original productions of Butley, opposite Alan Bates, and A.R. Gurney's The Cocktail Hour. She still holds her head high after taking over for Eve Arden, and one week later, opening the historic flop, Moose Murders. Recently she took Broadway by storm as writer and star of ANN, a one-woman show about the late Texas Governor Ann Richards, which resulted in rave reviews, a TONY Award nomination for Best Actress, Drama Desk and Drama League nominations, and the Outer Circle Critics award for Best Solo Performance. There is a filmed version for broadcast of the 2016 production of ANN presented at Zach Theatre in Austin, Texas, where Holland reprised the role and brought ANN home to Texas.

Following her Broadway run in ANN, Holland appeared in a movie titled Kepler's Dream, an inspiring film for a young audience, and last season in New York, she played another character who never leaves the stage and talks a LOT, in Pulitzer prize winner David Lindsay Abaire's dark comedy, Ripcord, at the Manhattan Theatre Club. This spring Holland wound up a four-month limited run on Broadway in the star-studded revival of The Front Page, opposite Nathan Lane, John Slattery, Robert Morse, John Goodman and other luminaries. Over the years in Los Angeles, she has performed on stage in Kindertransport, and played opposite Christopher Lloyd in Yasmina Reza's The Unexpected Man at the Geffen. She has given narrations for the Los Angeles Philharmonic with Essa-Pekka Salonen and John Adams, and narrated the Harry Potter Suite for John Williams at the Chicago Symphony Orchestra.

She has worked extensively in film and television, appearing in Romancing the Stone, Jewel of the Nile, To Die For, Next Stop Wonderland, One Fine Day, George of the Jungle, The Truman Show, Happy Accidents, Spy Kids (2 & 3), Keeping the Faith, Legally Blonde, and Baby Mama, with Tina Fey and Amy Poehler. On television, Holland has been nominated for the Emmy seven times, winning Best Supporting Actress in a Drama for the sexy, brilliant Judge Roberta Kittleson on The Practice. Among her numerous series starring roles: The Powers that Be, Norman Lear's short-lived but highly acclaimed political satire, Bosom Buddies, with Tom Hanks, and, of course, the juggernaut, Two and a Half Men, with her dear boys, Charlie Sheen, Jon Cryer and number 3 son, Ashton Kutcher. Holland was recently featured in Sebastian Lelio’s Gloria with Julianne Moore. Her current project: Mr. Mercedes, a limited TV series for Audience Network, starring the great Irish actor Brenden Gleeson, written by Executive Producer David Kelley, run by director Jack Bender, based on a trilogy of novels by Stephen King.

James Mellon received his Doctorate of Consciousness Studies from the Emerson Theological Institute in Northern California and is an ordained minister of Centers For Spiritual Living, a teaching that sees the Good/God in everyone and honors all walks of life that support and foster Love. He lives in Los Angeles, where he is the Founding Pastor of the Global Truth Center, a non-denominational Center whose vision statement is “Love Only - Forgive Everything - Remember Who You Are!”

Dr. James’ focus for the past twenty years has been to explore the intersection between Spirituality and the Arts. “Enlightenment Through Entertainment” is his mission statement and Dr. James’ vision and ministry is constantly expanding and exploring new ways to teach principle through music, dance, art and drama.
As an actor he made his Broadway debut as Riff in WEST SIDE STORY, directed by Jerome Robbins, and performed in many plays and musicals including, A CHORUS LINE (Broadway), 42ND STREET (Billy Lawlor - National Tour), THE FIFTH OF JULY (Regional) and Jesus in JESUS CHRIST SUPERSTAR (Chicago). He has worked at such theatres as The Goodspeed Opera House, The New York Shakespeare Festival, Cleveland Playhouse, The Kennedy Center, The Folger Theatre in Washington D.C., as well as The Williamstown Theatre Festival.

Dr. Mellon is a sought-after speaker, teacher and inspirational leader in the field of personal growth. He is the author of the book, MENTAL MUSCLE, 16-WEEKS OF SPIRITUAL BOOT CAMP and lectures throughout the United States and Canada. His new book, THE FIVE QUESTIONS has just been completed and will be published in the fall of 2019. You can find more information about his spiritual work at www.globaltruthcenter.org 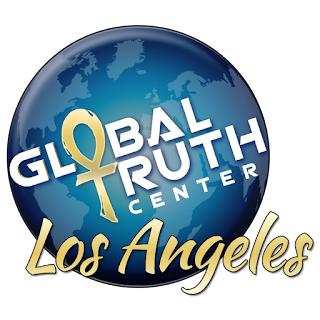 The Global Truth Center is an inclusive, spiritual community whose Vision Statement is:
"Love Only - Forgive Everything - Remember Who You Are!" www.globaltruthcenter.org