Dr. Charles Garfield, author of OUR WISDOM YEARS: Growing Older with Joy, Fulfillment, Resilience, and No Regrets (a Central Recovery Press paperback, on sale June 2nd). Dr. Garfield is also the founder of The Shanti Project 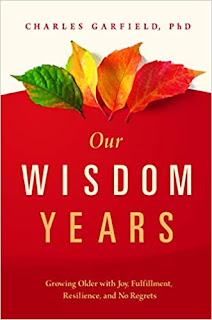 
Dr. Charles Garfield, author of OUR WISDOM YEARS: Growing Older with Joy, Fulfillment, Resilience, and No Regrets (a Central Recovery Press paperback, on sale June 2nd). Dr. Garfield is also the founder of The Shanti Project, a pioneering nonprofit that builds human connections to reduce isolation, and which now provides practical support to older and vulnerable adults who are housebound during the Coronavirus pandemic. As one of the first volunteer organizations in the US to provide support to people with life-threatening illnesses, Shanti has shined a light on the invisible suffering that accompanies illness and isolation.

In his new book, Garfield draws on the truths distilled from his long-term work with those at the end of life to encourage us to take the risk of being fully alive in our later years. A few talking points include:
Why we should let go of the productivity mindset as we age (or even, while we are in isolation!)
How to overcome gratitude fatigue
Why we should pursue hobbies that we haven’t yet been successful at
Why this time of isolation is a good time to mend estranged relationships
How to have deeper, more meaningful conversations, even while we are social distancing


About OUR WISDOM YEARS:

Our society urges us to fight aging rather than to embrace it. We are discouraged from slowing down, implored to keep our wrinkles at bay, and pressured to be “productive” in our retirement.

But, as psychologist Charles Garfield asserts in OUR WISDOM YEARS: Growing Older with Joy, Fulfillment, Resilience, and No Regrets (a Central Recovery Press paperback, on sale June 2, 2020), the later years are not defined by success and self-mastery like they are for young adults. Rather, those entering their sixties find that, instead of anxiously asking, “Do I have what it takes to compete?” they find themselves wondering, “Do I have what it takes to lead a fulfilling life?”

As the founder of The Shanti Project, an internationally honored volunteer organization dedicated to the care of the dying, Garfield is very well acquainted with this shift from “success thinking” to “legacy thinking.” In the later years, the drive to keep accomplishing is usually less pressing than the desire to nurture loving relationships and to contribute something that will live on.

To address this shift in values, Garfield offers an invaluable roadmap to help those entering the later years assess what they truly value, discover latent interests and passions that have been abandoned for more practical pursuits, and invest in the relationships that they value the most. Drawing on his own experience with aging, along with the accounts of several others that he has counseled through the years, Garfield helps those in later life to:
Embrace a period of radical self-discovery
Pivot away from duty towards the things that bring them joy
Apply their natural love for mission and goals to the project of building a soul-centered life
Relish slowing down and use idle time to embrace the most fulfilling stage of life
Forgive those who have wronged them
Learn to be grateful for their mistakes
Use their gifts to nurture what will live on
Broaden and deepen the love in their lives

Offering a vision of growth and expansion in a time many tend to associate with decline, OUR WISDOM YEARS helps older adults cultivate a sense of vision, resilience, and equanimity that they can count on throughout the challenges that the later years often present. Using questions, meditations, and exercises for self-reflection, Garfield helps readers to embrace and invest in the pursuits, passions, and people that they value the most.

Charles Garfield, PhD, is the founder of Shanti, an internationally honored volunteer organization dedicated to the care of the dying, the elderly, and those living with cancer and AIDS; the Shanti National Training Institute, which has taken Shanti’s model to organizations around the country and world; and Shanti’s newest program that serves older LGBTQ individuals. He has been teaching the skills of serving vulnerable people for more than forty years and is a pioneer in developing service-oriented volunteer organizations in which peers, not professionals, become “the difference between zero and one” for people at the end of life and, more recently, seniors in the LGBTQ community. For his work with Shanti and for originating the Shanti model of peer support, Garfield was named National Activist of the Year―one of America’s highest awards to individuals making voluntary contributions in public service.

He has also received recognition from cities and organizations large and small, including a Mayor’s Day in his honor in San Francisco and many other awards. For more than four decades, as a clinical professor of psychology in the Department of Psychiatry at the University of California School of Medicine at San Francisco (UCSF), Dr. Garfield continued his work in the care of dying patients and their families, many of whom were elderly. A Fellow of the American Psychological Association, he is currently a research scholar at the Starr King School of the Graduate Theological Union in Berkeley.

He teaches courses on aging and end of life care at the Metta Institute in San Francisco, where he is a founding faculty member and at the C.G. Jung Institute of San Francisco. While on the faculty of the Cancer Research Institute at UCSF, he was one of the early contributors to the burgeoning field of psychosocial oncology. Garfield began his career in computer science after receiving two graduate degrees in mathematics from Adelphi University as well as induction into Pi Mu Epsilon, the National Mathematics Honorary Society, and later, the Adelphi University Alumni Academy of Distinction. He earned a PhD in clinical psychology from the University of California at Berkeley. He writes for and serves on the editorial board of Greater Good, a national e-magazine from the University of California, Berkeley’s Center for Science and the Greater Good.
Posted by Get the Funk Out! at 8:03 PM