Coming up 8/24/20 at 9:30am pst! Life lessons from Sanford Greenberg, author of the new memoir HELLO DARKNESS, MY OLD FRIEND: How Daring Dreams and Unyielding Friendship Turned One Man’s Blindness into an Extraordinary Vision for Life 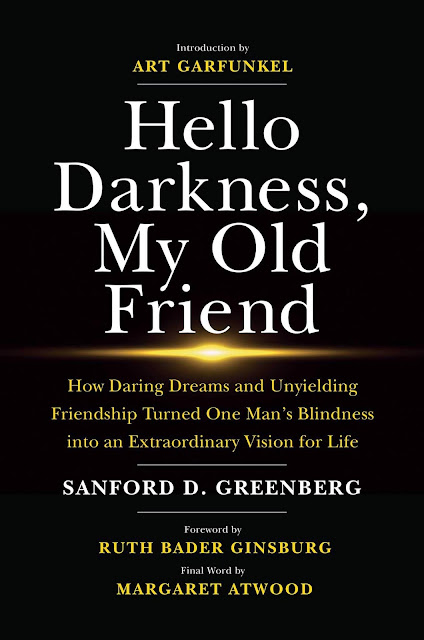 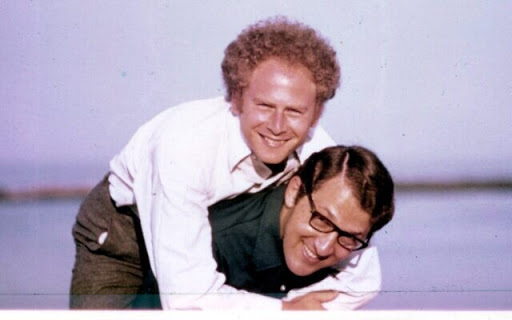 LISTEN
Life lessons from Sanford Greenberg, author of the new memoir HELLO DARKNESS, MY OLD FRIEND: How Daring Dreams and Unyielding Friendship Turned One Man’s Blindness into an Extraordinary Vision for Life (Post Hill Press/Simon & Schuster; June 30, 2020). With an Introduction by Art Garfunkel, a Foreword by Supreme Court Justice Ruth Bader Ginsburg, the Final Word by Margaret Atwood, and advance praise from Vice President Al Gore, it’s recently been featured in People magazine, AARP’s 4 New Books Offer Hope & Inspiration, NPR’s Kojo Nnamdi, and later this week Sandy he will appear on TODAY SHOW. Since this summer marks the 30th anniversary of the Americans with Disabilities Act (ADA), it’s an especially good time to talk about thriving despite challenging circumstances. Here’s his story in a nutshell:
What happens when a poor kid from Buffalo gets a scholarship to Columbia but then tragically goes blind during his junior year? Luckily for him, he has a roommate named Art Garfunkel—who reads his textbooks aloud, accompanies him to his classes, and guides him literally every step of the way. That kid—Sandy Greenberg—not only graduates Phi Beta Kappa as class president but goes on to receive a Ph.D. from Harvard, an M.B.A. from Columbia, a Marshall Scholarship to Oxford, and a White House Fellowship, before forging a remarkable career as an entrepreneur, investor, innovator and philanthropist. One of his inventions—the compressed speech machine—not only changed the lives of millions of blind people but helped shape the world as we hear it today—in recordings, podcasts and audiobooks. Now Chairman of the Board of Governors of The Johns Hopkins University’s Wilmer Eye Institute, later this year, Sandy will award $3 million—through his End Blindness 20/20 campaign—to the person or group who makes the greatest stride toward ending blindness for the next generation.
ABOUT SANFORD D. GREENBERG
Sanford D. Greenberg is Chairman of the Board of Governors of The Johns Hopkins University’s Wilmer Eye Institute, the largest clinical and research enterprise in ophthalmology in the United States. He is a Fellow of the American Academy of Arts and Sciences and a member of the Council on Foreign Relations as well as a Trustee Emeritus of The Johns Hopkins University and Johns Hopkins Medicine, which incorporates the School of Medicine and the Hospital.
President Clinton appointed Dr. Greenberg to the National Science Board, which oversees the National Science Foundation and advises both the President and Congress on policy matters related to science and engineering. He served as Chairman of the Rural Health Care Corporation, created by Congress to bring the benefits of telemedicine to America’s rural areas. Dr. Greenberg was a founding director of the American Agenda, an organization established by Presidents Carter and Ford to identify for President George H. W. Bush the six most urgent problems confronting the nation and to recommend bipartisan solutions. He also served as a director of the National Committee on United States–China Relations.
He is co-editor of the book The Presidential Advisory System, which discusses the methods used by American Presidents to obtain policy advice for the management of the federal government.
Dr. Greenberg received his B.A. as Phi Beta Kappa from Columbia University in 1962. He earned his M.A. and Ph.D. from Harvard University, and his M.B.A. from Columbia University. He was a Marshall Scholar at Oxford University and attended Harvard Law School. He lives in Washington, D.C. with his wife, Sue; they have three children and four grandchildren.
Learn more at sanfordgreenberg.com or https://www.hellodarkness-book.com/.
Posted by Get the Funk Out! at 7:26 AM