Sandra Tsing Loh, a performer, adjunct associate professor of Drama at UC Irvine, and author of seven books, including The Madwoman in the Volvo, which was named one of 2015's NY Times 100 Notable non-fiction books. 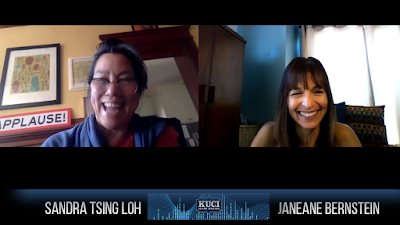 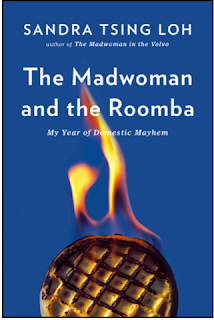 LISTEN to the show 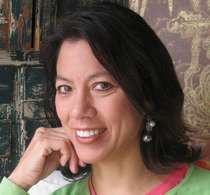 ABOUT SANDRA
SANDRA TSING LOH is the author of six books, including THE MADWOMAN IN THE VOLVO: MY YEAR OF RAGING HORMONES (2014, W.W. Norton), which was selected as one of the New York Times’ 100 Most Notable Books. It is based on her Best American Essay 2012 on menopause, originally published in The Atlantic Monthly. The Madwoman in the Volvo has inspired Sandra's new stand-up show, The B**** Is Back: An All-Too Intimate Conversation, running at The Broad Stage in July, 2015, as well as a multi-character play, which will premiere at South Coast Repertory Theatre in January, 2016.

SANDRA TSING LOH is the author of the THE MADWOMAN IN THE VOLVO: MY YEAR OF RAGING HORMONES (2014, W.W. Norton), which was selected as one of the New York Times' 100 Most Notable Books. It is based on her Best American Essay 2012 on menopause, originally published in The Atlantic Monthly. Her previous book, MOTHER ON FIRE, was inspired by her hit solo show about Los Angeles public education. During that time, she was named one of the 50 most influential comedians by Variety.

Her other solo shows include "Aliens in America" and "Bad Sex With Bud Kemp" (both off-Broadway at Second Stage Theatre), "Sugar Plum Fairy" (Geffen Playhouse, Seattle Rep), and "I Worry" (Kennedy Center, Actor's Theatre of Louisville). Her short story, "My Father's Chinese Wives," won a Pushcart Prize in 1996, and is also featured in the Norton Anthology of Modern Literature. Loh's previous books include A Year in Van Nuys, Aliens in America, Depth Takes a Holiday, and a novel, If You Lived Here, You'd Be Home By Now, which was named by the Los Angeles Times as one of the 100 best fiction books of 1998.

She has been a regular commentator on NPR's "Morning Edition," and on PRI's "This American Life" and "Marketplace"; currently, her weekly segment "The Loh Life"" is heard on KPCC. Loh's education includes a BS in physics from the California Institute of Technology, an institution which granted her a Distinguished Alumna Award, its highest honor, and for whom she was the first alumna to give a now-famous commencement speech.

Loh's combining of her communication and science skills continue with her syndicated daily minute "The Loh Down on Science," which is heard weekly by 4 million people. Excerpts from her solo piano CD Pianovision has been heard on several NPR shows, and she also scored the music for the 1998 Oscar-winning documentary Breathing Lessons. A Pushcart Prize winner, MacDowell Fellow and three-time National Magazine Award nominee, she is a contributing editor for The Atlantic Monthly and adjunct professor of visual art and science communication at the University of California, Irvine.

Sandra's stand-up show, The B**** Is Back: An All-Too Intimate Conversation, ran at The Broad Stage in July, 2015. Her multi-character play based on The Madwoman in the Volvo premiered at South Coast Repertory Theatre (SCR) in January, 2016, and enjoyed subsequent runs at The Pasadena Playhouse and Berkeley Repertory Theatre. Loh workshopped a new piece, "Blue State," at the Ojai Playwrights Conference in August, 2017. A new three-actor version of "Sugar Plum Fairy" will be produced by SCR in December, 2017. Loh is an adjunct associate professor of Drama at UC Irvine, where she also teaches Science Communication.
Posted by Get the Funk Out! at 1:06 PM