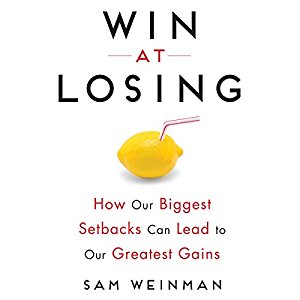 If you missed today's show, listen to my conversation
with Sam Weinman here!

"Because we live in a country where our most admired citizens are labeled "winners," we often fail to appreciate the tremendous value of defeat. Well, thank goodness for Sam Weinman, whose ode to dropping the ball, missing the shot, failing to rise to the occasion is a beautiful—and important—reminder that second place often trumps first. A blissful read."

About WIN AT LOSING:

Most people are driven to win. Whether it is in competitive sports, political or artistic endeavors, academic prestige, or any number of pursuits requiring talent and persistence. The desire to win has driven humanity’s most talented individuals to produce unfathomable achievements and to excel beyond their highest expectations.

However, this fixation on winning can also crush the human spirit. Like many parents, author and award-winning sports journalist Sam Weinman noticed how this need to win was preventing his sons from coping with inevitable losses (such as a lower grade on a test or a botched tennis match). Wanting to give his sons perspective, and having witnessed many greats in the world of sports weather crushing defeats, Weinman set out to discover how some of the most celebrated public figures were able to bounce back after humiliating, often epic losses.

In WIN AT LOSING: How Our Biggest Setbacks Can Lead to Our Greatest Gains (A TarcherPerigee Hardcover; on sale December 20, 2016), Weinman interviews pro athletes, business executives, politicians, and Hollywood stars, and consults leading psychologists and coaches, in order to understand the essential life skill of “learning to lose.” It turns out, being a good loser is exactly what we should aspire to be: resilient, objective, and persistent.

With inspirational and deeply personal stories from the likes of Emmy-award winning actress Susan Lucci, pro golfer Greg Norman, and presidential nominee Michael Dukakis, WIN AT LOSING offers a unique and much-needed take on the upside of losing, and why it is essential to enjoying a truly successful life.

SAM WEINMAN is the Digital Editor of GolfDigest.com, where, during his tenure, the website has grown to boast the largest digital audience in golf and has been nominated for several National Magazine Awards. Prior to that, he was the lead hockey and golf writer for The Journal News and LoHud.com, during which time he launched the popular hockey blog, "Rangers Report." For more than a decade, Sam's work has regularly appeared in Gannett newspapers around the country, including USA Today, and he has contributed to Golf World, Yahoo! Sports, ESPN the Magazine, and Sports Illustrated. He is the recipient of several national writing awards for his coverage of the PGA Tour and the National Hockey League. He lives with his wife and two boys in Rye, NY, where he coaches multiple youth sports teams.