Craig Carlson called in to the KUCI studios from Paris to chat with host Janeane Bernstein about his memoir, Pancakes in Paris and the restaurants Breakfast in America! 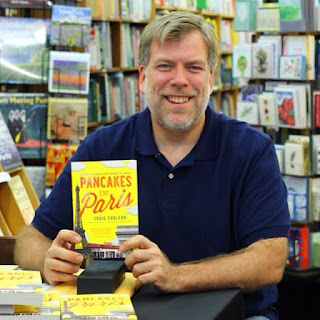 Thanks to Craig Carlson for calling in from Paris today!
If you missed Craig on today's show, listen here.


Pancakes in Paris – Living the American Dream in France

With a background in journalism, Craig Carlson received a B.A. from the University of Connecticut.  After graduation, he moved to Los Angeles where he studied at the University of Southern California, receiving an M.A. in film production. After winning the prestigious John Huston Directing Award, Craig wrote and directed a short film, Wheel of Torture, which went on to win awards at the Chicago Film Festival as well as the Lucille Ball festival of comedy. In addition to being a produced screenwriter, Craig worked as a translator for Letters: Jean Renoir, a book on the famous French director.

In 2003, Craig completely shifted gears and decided to open the first American diner in Paris, France. After more than a decade in business, Breakfast in America continues to serve authentic breakfasts and burgers to customers from all over the world. Pancakes in Paris is Craig’s debut memoir, with many more stories to follow.

www.Breakfast-in-America.com www.PancakesInParis.com
Posted by Get the Funk Out! at 7:01 PM