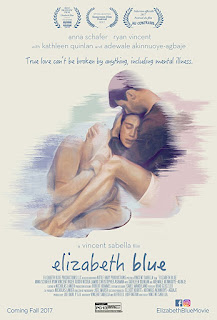 Recently released from a psychiatric hospital, Elizabeth (Anna Schafer) returns to her Los Angeles apartment where she lives with her fiancé, Grant (Ryan Vincent).

With the guidance of her new psychiatrist, Dr. Bowman (AdewaleAkinnuoye-Agbaje), and the unfaltering support of Grant, Elizabeth works at regaining control of her mental stability and her life as she begins to plan their wedding.

ELIZABETH BLUE was written and directed by first-time filmmaker Vincent Sabella. Sabella is a diagnosed schizophrenic and the film is loosely based on a time in his life when all of his medications failed.

Global Digital Releasing will release ELIZABETH BLUE in NY, LA, and an additional 10 markets on September 22. The film has a running time of 94 minutes and is rated PG-13 by the MPAA.

The filmmakers and GDR have partnered with NAMI (National Alliance on Mental Illness) and ELIZABETH BLUE is scheduled to screen at multiple NAMI Affiliate locations across the country during the film's opening weekend. NAMI is the largest grass roots mental health organization in the country and works with celebrities and filmmakers as part of their ongoing efforts to raise awareness and combat stigmas associated with mental illness. NAMI will also be receiving a portion of the film's proceeds.

To view the trailer, go to: https://www.youtube.com/watch?v=faXEc87xsks