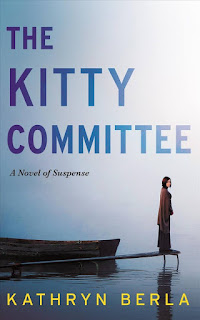 Every year, it comes. And every year, it reminds Grace that someone knows her deepest secret—the secret whose silence has tormented Grace over the years. That secret began with an innocent gang of teenage friends who called themselves The Kitty Committee.

The Kitty Committee of Grace’s youth was ostensibly a group of friendship and support. But the friends fell victim to the ringleader’s manipulative personality and recklessness, which set the girls on a course of vigilante justice, culminating in an act that will forever change their lives, an act that becomes their shared secret.

Grace’s silence and guilt has led to over twenty years of disappointing relationships, an inability to commit, and a crisis of morality. And no matter how much Grace has suffered and lost, still it comes every year. The reminder that someone out there wants The Kitty Committee to suffer--someone who won’t forget and won’t forgive.

Kathryn Berla’s fifth book, The Kitty Committee is a thrilling story of guilt, relationships, sin and atonement for a decades-old secret shared between a circle of once-inseparable friends.

ABOUT
Kathryn Berla enjoys writing in a variety of genres including light fantasy, contemporary literary fiction, and even horror. She writes for all ages: children, middle grade, young adult, and adult. She's the author of the young adult novels: 12 HOURS IN PARADISE, DREAM ME, THE HOUSE AT 758, and GOING PLACES, which received VOYA Magazine's Perfect Ten rating.


A JOURNEY OF ORDINARY PROPORTIONS is her middle grade novel for adults. And although ORANGE DOG, a children's picture book, exists only in her heart, it holds a special place there.
THE KITTY COMMITTEE is her first novel written strictly for adult readers.
Kathryn grew up in India, Syria, Europe, and Africa. The love of experiencing new cultures runs deep and she gives into it whenever she can. Her goal is to visit every continent with the exception of Antarctica, so she still has two to go. She has been an avid movie buff since childhood and often sees the movie in her head before she writes the book. Kathryn graduated from the University of California in Berkeley with a degree in English. She lives in the San Francisco Bay Area.