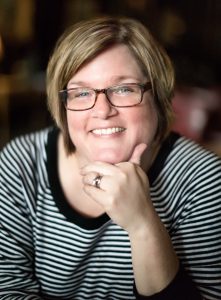 Lori Rader-Day is an Anthony Award winner and William Morrow/Harper Collins novelist whose frontlist title this summer hinges on a plot drive by the "dark sky" community. Essentially there are internationally protected areas where lights are off so that the stars can be seen and there is no "light pollution."


Lori-Rader day is a thriller writer and not a scientist, but a dark sky preserve is her setting and she's spent time on them. She has some interesting insights in relationship to her own experiences, as well as speaking about her book.

STARRED REVIEW “Fans of Agatha Christie’s And Then There Were None will be riveted by Rader-Day’s (The Day I Died) latest psychological thriller, which makes you question who you really know and trust and whether you should be afraid of the dark.” –Library Journal

My firm began working with Lori at the beginning of her career with her debut release, "The Black Hour," in 2014 which won an Anthony Award for Best First Novel at the Bouchercon World Mystery Convention, and was named a finalist for the Mary Higgins Clark Award as well.

“I don’t know a writer who captures better the insecurities and damaged and damaging relationships of ordinary women.” -Ann Cleeves, winner of the Crime Writers’ Association Diamond Dagger

Since her husband died, Eden Wallace's life has diminished down to a tiny pinprick, like a far-off star in the night sky. She doesn't work, has given up on her love of photography, and is so plagued by night terrors that she can't sleep without the lights on. Everyone, including her family, has grown weary of her grief. So when she finds paperwork in her husband's effects indicating that he reserved a week at a dark sky park, she goes. She's ready to shed her fear and return to the living, even if it means facing her paralyzing phobia of the dark.

But when she arrives at the park, the guest suite she thought was a private retreat is teeming with a group of twenty-somethings, all stuck in the orbit of their old college friendships. Horrified that her get-away has been taken over, Eden decides to head home the next day. But then a scream wakes the house in the middle of the night. One of the friends has been murdered. Now everyone—including Eden—is a suspect.

Everyone is keeping secrets, but only one is a murderer. As mishaps continue to befall the group, Eden must make sense of the chaos and lies to evade a ruthless killer—and she'll have to do it before dark falls…

Loriraderday.com/
Posted by Get the Funk Out! at 11:58 AM