The Search for Freedom World Premiere

Finding Freedom from Living in the Moment 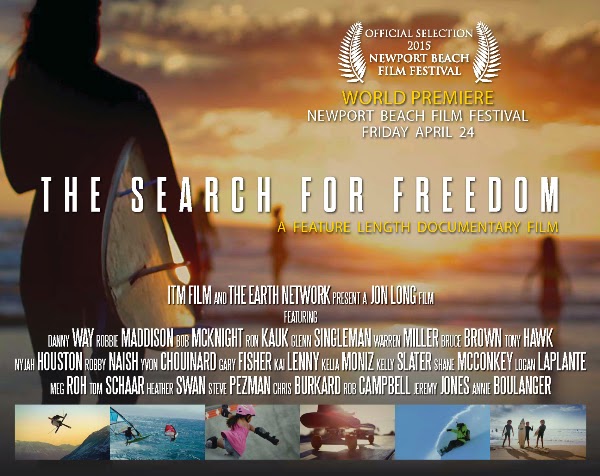 THE SEARCH FOR FREEDOM is a story told through the eyes of a group of people who helped create a cultural phenomenon. It is about the freedom that is accessible to everyone; the freedom that comes from living in the moment and doing what makes us feel the most alive. This documentary written and directed by Jon Long (IMAX® Extreme) is about the infinite possibilities available to anyone willing to drop in. It's a visceral, visual experience via some of the brightest pioneers, legends, visionaries and champions of surfing, snowboarding, skiing, skateboarding, mountain biking and more.


This revolution has been televised, but the film explores the human stories behind this movement that has spilled into primetime. Ski film Godfather Warren Miller explains that, "The basic instinct of a human being is his search for freedom." The film explores how living in the moment and doing what makes you feel most alive can be key to that freedom.


“I wanted to tell a bigger story about this movement," says Long, “Despite appearances, what drives the characters in this film is not so very different from the fuel that successful artists, scientists and entrepreneurs run on: passion, creativity, grit, and a willingness to try new things and fail.”


In The Search For Freedom, these characters are searching for something larger than themselves, whether that's an ocean, a mountain or a city street. By exploring timeless themes such as pushing your comfort zone, risk, fear and the unquenchable desire to learn, the film unravels the cultural implications of these lifestyles through candid conversation and some of the finest adventure footage ever assembled.


But how did we arrive in this world where surfing imagery in NYC subway ads greets bankers and municipal skateparks share space with baseball diamonds? Despite recent "media darling" status, these high-adrenaline activities only exploded in the last few decades because of their inherent power to change lives. Many claim that the freedom experienced when you are riding a moving wave, becoming part of that wave for an instant, is impossible to shake. It's a state of grace. And it's the same whether you're sliding on snow, skateboarding on concrete, or mountain biking through a rainforest.


Veteran surf publisher Steve Pezman taps into the source: "The wave is forming in front of you, the wave is over your head, your wake is disappearing, your footprints are washed from the beach. There’s no material production from having done it. There’s no depletion. There’s no creation. It’s just an aesthetic instant." That aesthetic instant is the real subject of The Search for Freedom.