If you missed Joan on today's show,
listen to our conversation here! We had a great chat!
(Joan you are one AMAZING, inspiring woman!
Keep on tap dancing!) 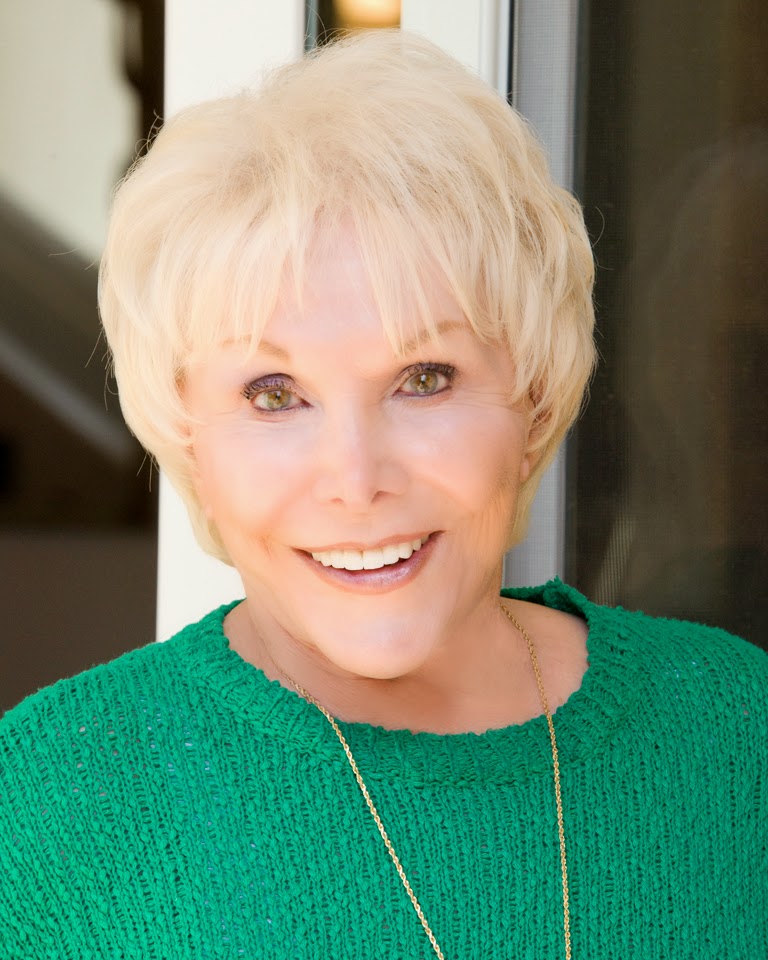 Decades of work on stage, screen, and television and the love of three devoted men sounds like a full life; but in many ways, the story is just beginning for veteran performer Joan Benedict Steiger. With credits dating back to the original “Candid Camera” on television to her acclaimed solo performance as Leona Helmsley, she has lived the artistic life she first dreamed of as a child in Brooklyn, New York – and the dream shows no signs of ending.

“I always thought when I was little I would be a dancer,” Steiger recalls today. “I was never really built for ballet, but I was tap dancing in public at age seven when I performed at the Brooklyn Academy of Music. I remember the first film I ever saw was with Fred Astaire and Ginger Rogers, and as I was leaving the theatre, I wanted to run back in, I knew I had to be a part of that world.”

As the only grandchild in a large family – she had seven uncles – Steiger grew up in her grandfather’s house off Prospect Park, where she describes herself as “Eloise at the Plaza – every one of those rooms was my magic room.” Encouraged by her mother, young Steiger studied at the Rome Opera Ballet School, and spent time in Paris, soaking up her craft and European culture and learning French and Italian. Back in America, Steiger continued her theatrical education by studying with legendary acting coaches Robert Lewis and Stella Adler, founders of the Actor’s Studio in New York. That pursuit of her craft continues today, as she continues to get a charge out of the challenge that each new acting job brings.

Her list of stage credits include acclaimed productions of contemporary offerings such as “Promises, Promises,” “The Beauty Queen of Leenane,” “Collected Stories” by Donald Margulies, P.J. Barry’s “The Octette Bridge Club,” Horton Foote’s “The Traveling Lady,” and Morris West’s “The World is Made of Glass;” opposite Don Knotts in the comedy “The Mind with the Dirty Man;” classics like “Richard III,” “The Dyubbuk,” and “Dr. Faustus;” and her two solo shows, “Leona” (about notorious “Queen of Mean” Leona Helmsley) and the recent “The Loves of My Life,” based on her own life. On screen, she also co-starred with Knotts and Tim Conway in the comedy “The Prizefighter.”

Indeed, perhaps Joan Benedict Steiger’s career is all the more remarkable for having endured through three long-term relationships, to what she describes as “three of the greatest guys in the world.” While marriages between professional actors are often fraught with jealousy and competition, Joan has found lightning in a bottle all three times. “Both of my husbands, and my lifetime partner Jeremy, were wonderful men who respected me as an actress,” she recalls. “They all died from different forms of cancer, so my memories are sometimes bittersweet, but with no regrets.”

“Strangely, I met all three of these men when I was in New York, just beginning my career while I was still a teenager,” she says. She was only 19 when she met actor Rod Steiger, who took an instant liking to her when they appeared on the same television show together.

“I was in complete awe of him at the time,” she admits. “I remember walking out after seeing him in the play ‘Rashomon’ on Broadway, and seeing his face on the marquee across the street for the movie ‘Al Capone.’ I thought, what a life – starring on Broadway and starring in a movie! Knowing him at that age was like living in a fantasy.”

Though the initial romance with Rod was short-lived, given their respective dedication to pursuing their careers, Joan soon found herself in love with leading stage actor John Myhers. “He toured in ‘The Sound of Music’ for three years as Captain von Trapp, and I would take time off to travel with him,” she says. Settling in a home near Sunset Plaza in the Hollywood Hills, their marriage lasted thirty years before Myhers’ passing. Then, in the late 1990s, Rod and Joan found each other again. Rod had heard rave reviews of some of Joan’s stage work. “I got a call from him out of the blue…he’d been at a party where someone had mentioned me, and we got together again after all those years.”

Joan and Rod were nearly inseparable for the final years of his life, becoming creative partners as well as spouses. “Rod was very impressed with my acting. Whenever a script would arrive at the house, he’d ask me to read it for my feedback, then he’d say ‘Did you pick out your part yet?’” They appeared in two films together, “A Month of Sundays” and the telefilm “The Flying Dutchman.” After a long life marked by tremendous highs and crushing lows – Steiger acknowledged suffering from chronic depression for much of his professional career – the Academy Award winning actor seemed to find new confidence and peace with his newly rediscovered love. “On one of the films we made, on the last day of shooting, Rod presented me with an Oscar-like statue he had made with my name on it, in front of the entire crew,” Joan remembers. “With me he said he was another person, and the only time in his life he had such happiness. He told me I was the only woman who could bring love out of a stone.”

Steiger’s passing in 2002 was a devastating loss, but another friend from long ago was able to fill some of the void. Actor Jeremy Slate, a veteran of over 80 films and television shows dating back to 1959, was Joan’s partner until his passing in 2006. “They were all actors, writers, directors, brilliant, funny men,” Joan says of the men who captured her heart.

Throughout her life, Joan Benedict Steiger has worked simultaneously on stage, in film, and on television. She’s still remembered for a classic bit from the original version of “Candid Camera,” where she played a lost tourist looking for directions from passersby, making sure that her fancy hat – beplumed with a particularly large feather – would distract them at every opportunity. She was also part of the ensemble of the original “Steve Allen Show,” where she did double duty as the spokesperson for Hazel Bishop cosmetics. On daytime drama, she had regular and recurring roles on “General Hospital,” “Days of our Lives,” and “Capitol.” Her dozens of series guest appearances include classic series like “Fantasy Island,” “T.J. Hooker,” “The Incredible Hulk,” “Kojak” and “Hotel,” with the latter being directed by series star James Brolin. Most recently Joan guested on Fox’s “Dollhouse.”

Perhaps one of Joan’s most unusual jobs is one where she was asked to “fill in” – in a manner of speaking – for a Hollywood legend. “I had been bothering the casting director at MGM for a while when he finally told me, ‘I have something for you.’” MGM was preparing to make the film “Butterfield 8” starring Elizabeth Taylor; the star had been reluctant to cooperate because she was eager to begin work on the epic “Cleopatra.” MGM wanted to shoot the film in studios in New York and Taylor wanted to remain in Los Angeles. Joan was asked if she could go to New York to rehearse the film – playing Taylor’s part – with director Daniel Mann and therest of the cast. Joan worked for weeks reading Taylor’s lines, and her dedication paid off when she was awarded a small part (a single line) in the film – for which she still earns residuals.

The role won Taylor her only Academy Award, but curiously, their paths would cross again years later through their mutual acquaintance with Rod Steiger. “When Rod and I were first dating, he went to see Elizabeth about working on a new project,” she says. “This was a period when she wasn’t feeling well, and Rod was one of the people who really encouraged her to get well and return to public life. That lead to speculation that Rod and Liz were dating and he was going to be her next husband. Rod and I were on an airplane to Spain, and he liked to read the tabloids: when I saw the headline saying Liz and Rod were going to wed, I said, ‘What’s this all about?’ And he smiled at me and said, “Joan, I’m sitting next to YOU!”

For now, Joan keeps busy preserving the legacy of her late husband, as well as continuing her stage, film, and television work whenever the right opportunity presents itself. ‘There’s still so much I can do, I’m still learning after all these years,” she explains. “I have a regular table at my favorite restaurant in Malibu and it faces the door, because I want to watch everyone walk in, I want to observe the way they use their body, because that’s so much a part of my process as an actress.” Although she has written her memoirs, Joan still knows that there are more chapters of her life left to live, and many more roles left to play.