10/15 at 9am pst - Janeane spoke with Award-winning author Dana Chamblee Carpenter about her final installment in Bohemian Trilogy, "Book of the Just"

Dana's first book, “Bohemian Gospel” was awarded the Killer Nashville Claymore Award. The second book in her trilogy, “The Devil’s Bible” not only won the Silver Falchion in the Sci-Fi/Fantasy/Horror category but also Best Overall novel at Killer Nashville. 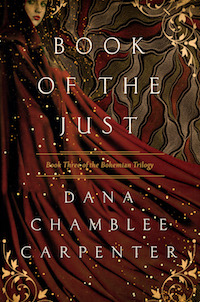 NASHVILLE, TN – Dana Chamblee Carpenter closes out her award-winning series Bohemian Trilogy with “Book of the Just” (October 2, 2018, Pegasus Books), which continues Mouse’s story after “The Devil’s Bible” and completes the journey she started so long ago in “Bohemian Gospel.” The first book in the series, “Bohemian Gospel”, won the 2014 Killer Nashville Claymore Award. Publishers Weekly called it “a deliciously creepy debut.” Her second book, “The Devil’s Bible,” also received rave reviews. Booklist said: “Carpenter’s follow-up to her debut novel, Bohemian Gospel, is as richly woven as her first. A terrific follow-up.”

Imbued with a rich sense of history, magic, and mythology, Mouse’s journey is coming to an end. After centuries of searching, Mouse now has everything she’s ever wanted within her reach—a normal life, a lover, a brother. Cherished by a father, coveted by a king, loved by an almost-priest; tormented by demons, tortured by a madman, hunted by a cult, hounded by her father. Mouse has survived it all. But then, she was never just a girl.

Dana Chamblee Carpenter is the author of “Book of the Just,” the third novel in The Bohemian Trilogy. Carpenter’s award winning short fiction has also appeared in The Arkansas Review, Jersey Devil Press, Maypop, and, most recently in the anthologies, “Dead Ends: Stories from the Gothic South,” and “Killer Nashville Noir: Cold Blooded.” She teaches at a university in Nashville, TN where she lives with her husband and two children. Visit her at http://www.danachambleecarpenter.com/.

“Book of the Just” 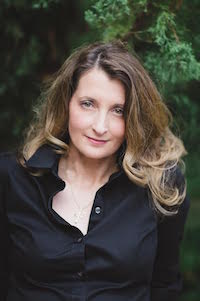 In an interview, Dana can discuss:


The in-depth research she did into the 13th century, Bohemian and other cultures’ histories for her books

How she balances writing within different genres (thriller, paranormal, historical fiction) in the Bohemian Trilogy

Her success with “Bohemian Gospel”, which won Killer Nashville's Claymore Award, and how/if that influenced the rest of the series

Her interest in exploring cultures, experience, and realities that many readers are not traditionally exposed to

How did Mouse's story first come to you? Did you ever see it going as far as a trilogy?

When I tell the story about meeting Mouse, I always feel like I have to clarify first that I’m not crazy—but she came to me in a vision. (And in my defense, I’m not the only writer who talks about seeing “visions.”) I’m a mom, which means much of my time is spoken for, so getting some quiet time when no one needs something from me is like finding the Golden Ticket. This particular Willy Wonka moment came on a ride back home (to Arkansas) for Thanksgiving.

The kids were watching a movie in the backseat. My husband was driving. And my mind was free to wander. Wander it did—all the way to a battlefield somewhere in history (they had swords and were on horseback) and to a woman who stood looking out over the fighting. She wore the most terrible expression of anguish and determination. I was fascinated. I HAD to know who she was and why she was mad and what she was determined to do. But even with the vividness of the scene, I think I would have lost her if I hadn’t heard her name whispered like an echo on the wind—Mouse. I grabbed a napkin from the floorboard and a pen from the console and jotted it all down.

As far as thinking about Mouse’s story in terms of a number of books—no, not really. But I knew pretty quickly that there was something odd about her, and once I realized what it was, I knew that she had LOTS of story to tell and that I wouldn’t be able to finish it in one book. The BOHEMIAN TRILOGY gives us a nice arc—from discovery of who she is in BOHEMIAN GOSPEL and wrestling with guilt of what she does in THE DEVIL’S BIBLE to facing her most dangerous temptation and most desperate quest for redemption in THE BOOK OF THE JUST.

You give such an intriguing glimpse of history and culture that is often not touched upon. What drew you to write a story in Bohemia during the 13th century and the new amazing places “Book of the Just” takes us?

I don’t tend to start out with a setting in mind—how fun would it be to know your destination ahead of time? I go where the character takes me, and it makes for a much more adventurous journey. When I discovered the connection between Mouse and the infamous medieval codex known as the Devil’s Bible, I knew her story started in the 13th century in Bohemia because that’s where and when the codex was written. But once Mouse got me there, I fell in love. I sometimes wonder if, in a different life, I lived in that part of the world.

The more I learned about the places and the people and the stories and the culture, the more I felt like I was coming home somehow. Similarly, practical aspects of the story took me to the places in BOOK OF THE JUST. Parts of Australia are remote and shrouded in ancient mythical truths—just the kind of spot Mouse would go if she needed a place to hide. Likewise, the Book of the Just (a real book like the Devil’s Bible) and my research of ancient Hebrew history took me to the Middle East and parts of Africa. And again, I felt a visceral connection to these places and a deep respect for the people who live there. I love going to these places and I love taking my readers with me. Too often we get anchored in our comfortable spaces and forget how beautifully diverse the world is. I want to make the unfamiliar familiar for myself and my readers so we can appreciate our differences while reveling in the joy of all that makes us human.

How does your career as a teacher influence your writing?

I really don’t think of teaching or writing as a career. Career seems like something you choose. Writing and teaching chose me—sometimes against my will. ☺ I guess that makes them a calling. Whatever we name them, they are both integral parts of who I am, entwined and inseparable. I see teaching as a form of storytelling. Education is about learning to hear the stories around us, to connect to them and empathize with them, to understand them so that we can learn our own stories—in truth and without posturing or judgment. And then, once we’ve listened to or read the stories around us, we must learn to tell those stories and our own. Storytelling is also a form of teaching. The journey of writing and research teaches me so much about humanity and the world and history and science, the known and the unknown. I learn and then I share that with my readers, and then my readers teach me. It’s the same process I go through as a teacher—I learn and share with my students and then my students teach me. I suppose the deep current running through all of it is an insatiable curiosity.

Mouse's relationship with her father brings to light a lot of questions of morality and forgiveness. Tell us more about this tension in their relationship and also how the characters in “Book of the Just” deal with temptations.

I grew up attending a traditional protestant church in rural Arkansas. I can’t tell you how many times my Sunday school teachers reached out to my parents—worried because I was asking so many questions. (The most awkward was probably when I asked for a definition of circumcision. ☺) Fortunately, my mom and dad encouraged me to ask questions (they also explained circumcision) and to seek out my own answers. One of the questions that kept me up at night was about the “Unforgivable Sin.” What was it? The idea that there was some unnamed “something” I might do that was unforgivable had me tied up in knots. When I became an adult, I realized how complicated forgiveness was—especially forgiving yourself.

That’s the wrestling match at the heart of Mouse’s relationship with her father. It’s something they both share in an incredibly unique way. And, it’s ultimately the issue that drives them apart in THE DEVIL’S BIBLE. She makes one choice about forgiveness and he makes another. But in BOOK OF THE JUST, Mouse’s capacity for forgiveness is tested beyond even her endurance. It brings her closer to her father—dangerously close.

Your writing intricately mixes history, thriller, and a feeling of mysticism and magic. What things do you see influencing these aspects of your writing?

I’ve always been an eclectic reader. I read everything, every genre, including poetry and plays, both “literary” fiction and “commercial.” (I’m not sure what those labels offer us so I’m wary about using them.) I love going to new places and new times, and I love playing with “what ifs.” When I go looking for a common thread in my favorite writers, be it Eudora Welty or Maya Angelou or Neil Gaiman or William Faulkner or Stephen King or Katherine Howe or Naomi Novik or countless others, I see that each of them and the stories I find most compelling reveal a world to me where there is so much more that we don’t understand than what we think we do. That’s the world I want to live in—full of the thrill of discovery and the play of what if. And that’s the world I want to create for my readers, too. The unknown, the mysterious, the magical lives among us in the everyday. We just have to teach ourselves to look for it.
Posted by Get the Funk Out! at 1:33 PM