10/29/18 at 9:15am pst - Cheray O’Neal (Actor, Playwright, Producer) joined Janeane to talk about her solo show, Journey This - a 2 time NAACP Theater nominated solo show (2018) written and performed by Cheray 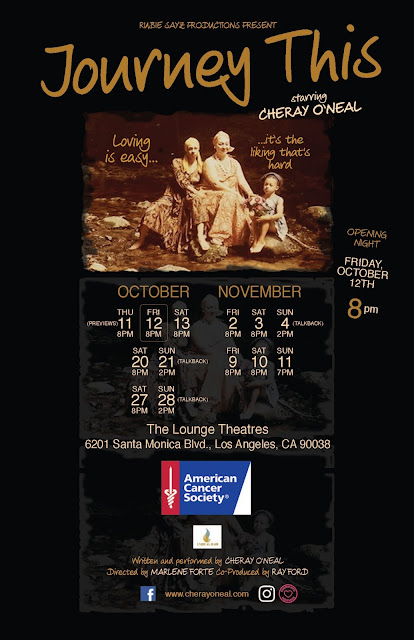 Synopsis
Journey This is a 2 time NAACP Theater nominated solo show (2018) written and performed by Cheray O’Neal. It’s a transcendent love letter to family and an exercise in breaking the generational curse of stoic womanhood. A granddaughter searches her past to make sense of her present by breaking family cycles and awakening the power of forgiveness.

Story
It’s the day of her grandmother’s funeral and the grief has reached a boiling point. Journey, stoic and alone, is forced to face demons long suppressed while navigating the pull between self love and destruction. Death is the greatest teacher for the living, but can Journey learn the lesson before it’s too late?

This powerful, humorous, bittersweet memoir charts triumph over self-destruction while navigating the ebbs and flows of grief.


~10% of the entire runs' proceeds benefit


WATCH the Promo of Journey This: https://youtu.be/LbxyLsvh_FM 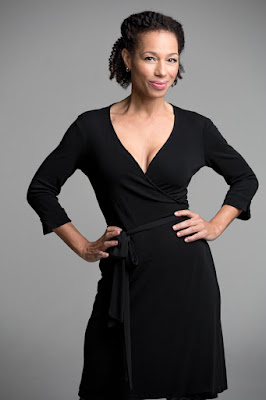 About Cheray
Cheray O’Neal (Actor, Playwright, Producer) is an actor and award-winning writer-poet. She can be seen in the highly acclaimed film H4, produced by Harry Lennix and the Mark Pellington directed documentary Honesty. She’s a proud member of the LAByrinth Theater Company, and is creator/co-writer of a 17 episode web-series (currently in pre-production) titled HOTmEsS with director Kimberly Greene Williams. She’s authored and published two books, A Taste of Sour Honey and Love of the Lick; won Best trade feature in the USA for her piece Home Away From Home; and judged the renowned Teen Poetry Slam Get Lit.

Cheray was a guest artist for the NAACP Image Awards Nominee luncheon where she wrote and performed for their centennial anniversary event. She’s recorded two EP’s on the Javi Coltrane produced album In This Day, and was writer-performer of the title song ‘O’ for Showtime’s hit docudrama The O Tapes. National TV campaigns: for Direct TV, Ford, Sears, Walmart, Taco Bell, Hyundai, Cellar One and Bank of America.

She’s equally proud to include activism in her repertoire, having traveled internationally to facilitate Born, her creative writing poetic theatre workshop for teens. www.cherayoneal.com


A Personal Statement from CherayI’m hoping the show gives people permission and freedom in their lives to find their truth, talk about it and ultimately heal. Time is short and precious, share your truth, that’s where the healing begins, you are not alone, be a part of something greater than yourself, you can be a ripple and make a change.“The pain and fear literally starts and stops with you”.
Posted by Get the Funk Out! at 9:05 AM