JORGE CHAM & DANIEL WHITESON, authors of WE HAVE NO IDEA: A Guide to the Unknown Universe join host Janeane Bernstein on KUCI 88.9fm Monday May 22 at 9:30am PST! 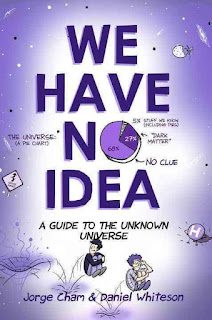 Prepare to learn everything we still don’t know about our strange, mostly mysterious universe.

PHD Comics creator Jorge Cham and particle physicist Daniel Whiteson team up to explain everything we DON'T know about the universe, from cosmic rays and dark matter to time travel and the Big Bang. Filled with their popular infographics, cartoons, and clear and entertaining explanations, this book is perfect for anyone who's curious about science and all the big questions we still haven't answered.


Their PHD TV videos have been viewed millions of times on YouTube and aired on PBS.


If you missed Jorge Cham and Daniel Whiteson on today's show, listen here!

Authors of WE HAVE NO IDEA:

A Guide to the Unknown Universe

In WE HAVE NO IDEA: A GUIDE TO THE UNKNOWN UNIVERSE (Riverhead Books), Cham and Whiteson explore why a vast portion of our universe is still a mystery, and what a lot of smart people are doing to understand it. Along the way, and with over 400 incredible, original illustrations, they illuminate everything from quarks and neutrinos to gravitational waves and exploding black holes. WE HAVE NO IDEA invites us to see the universe as an exciting expanse of mostly uncharted territory that’s still ours to explore.

Pop Quiz About the Universe – see how much you do(n’t) know about the universe!


2. How will the universe end?


3. What happened before the Big Bang?


4. How big is the universe? And does it go on forever or does it loop around on itself?


6. How many dimensions are there?


7. Why can’t we travel faster than light?


8. What is the universe made of? And what is dark matter?

Jorge Cham is the creator of the popular online comic Piled Higher and Deeper, popularly known as PHD Comics, and earned his PhD in robotics at Stanford.

Daniel Whiteson is a professor of experimental particle physics at the University of California, Irvine, and a fellow of the American Physical Society. He conducts research using the Large Hadron Collider at CERN. Twitter: @DanielWhiteson
Posted by Get the Funk Out! at 10:50 AM