Popular Mom Blogger/Author Sarah Turner joins host Janeane Bernstein 5/29 at 9:00am PST to talk about her latest book, "THE UNMUMSY MUM: The Hilarious Highs and Emotional Lows of Motherhood." 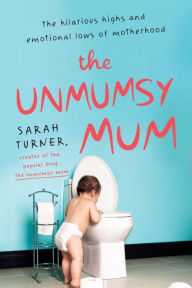 THE UNMUMSY MUM: The Hilarious Highs and Emotional Lows of Motherhood (A TarcherPerigee paperback; available to US audiences on April 18, 2017) by popular mom blogger, Sarah Turner. In this candid and relatable internationally bestselling title, Turner compiles her uncensored musings on the real highs and lows of new parenthood, giving voice to the normal thoughts that often riddle parents with guilt.

Covering everything from “babywearing incompetence” to “second-child shortcuts,” THE UNMUMSY MUM reveals that we can read every parenting manual under the sun but still have no bloody clue—and not having a clue is just fine.

ABOUT THE AUTHOR
Sarah Turner grew up in Cornwall, England, and graduated from the University of Exeter in 2008 with a degree in Philosophy and Sociology. She worked at the Royal Bank of Scotland until 2012, when she gave birth to her first son and decided to work part-time at the University. Despite achieving the 'holy grail' of part-time work/part-time parenting, Sarah found motherhood considerably harder than she had anticipated, and for this reason, started writing the Unmumsy Mum blog. In 2014, Sarah's second son was born, and amidst the chaos of life with two children under three, she decided to dedicate more time to the blog, which now has more than four million page views.
Posted by Get the Funk Out! at 11:05 AM