Historian Huw Lewis-Jones, an author who travels regularly to the Arctic and Antarctica as a polar guide, joined host Janeane on 5/8 9:45am pst - to talk about his explorer travel journal, EXPLORERS’ SKETCHBOOKS - a collection of beautiful thoughts and drawings of travelers dating back to the 17th century. 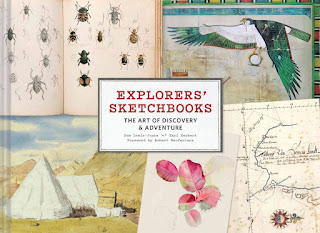 Huw Lewis-Jones is a historian and author who travels regularly to the Arctic and Antarctica as a polar guide. Kari Herbert has written several books on exploration and is the daughter of polar explorer Sir Wally Herbert. Huw and Kari are married and live by the sea in Cornwall, England.


In the great vein of the explorer travel journal, EXPLORERS’ SKETCHBOOKS collects and displays the beautiful thoughts and drawings of travelers dating back to the 17th century.


The sketchbook has been the one constant in explorers' kits for centuries of adventure. Often private, they are records of immediate experiences and discoveries, and in their pages we can see what the explorers themselves encountered. This remarkable book showcases 70 such sketchbooks, kept by intrepid men and women as they journeyed perilous and unknown environments—frozen wastelands, high mountains, barren deserts, and dense rainforests—with their senses wide open. Figures such as Charles Darwin and Sir Edmund Hillary are joined here by lesser-known explorers such as Adela Breton, who braved the jungles of Mexico to make a record of Mayan monuments. Here are profiles, expedition details, and the artwork of pioneering explorers and mapmakers, botanists and artists, ecologists and anthropologists, eccentrics and visionaries. Here is the art of discovery.