Author Marie Trout Ph.D. wife of blues rock guitarist extraordinaire, Walter Trout, joined host Janeane Bernstein to talk about her newly released book: The Blues – Why it Still Hurts so Good - Monday May 8 at 9:00am pst! 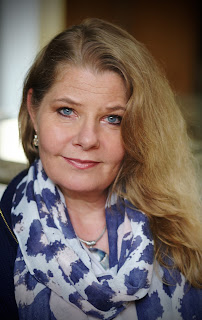 For almost a quarter century working in the music industry, Marie wondered what it is that happens to perfectly ordinary people when attending blues concerts. Emotions drift across faces like migratory clouds moving across a sunny sky, toes tap and bodies start to sway. Looking at blues audiences from the stage, is to bear witness to displays of ever-changing life-affirming panhuman expressions of elation, joy, wonder, release, vulnerability, immersion, sadness and grief. When lost in blues music, the straight-faced watchfulness, otherwise customary in social situations, lessens. Marie muses:


– I have always been curious in how music, and particularly blues music, somehow transforms us in subtle, but pervasive ways: how it can lift moods and just make us feel comforted: enveloped, interconnected, and that it is OK to just be.

It was natural for her, therefore, to use this curiosity as driving force in approaching her PhD research: She embarked on a Grounded Theory study of what contemporary (mainly white and middle-aged) blues fans get out of their love affair with the genre today. Combined academic findings highlighted and illustrated by story-telling find expression in her book: The Blues – Why it Still Hurts so Good.

Born in Århus, Denmark in 1962, growing up Marie often felt alone and that she was “a bit of a strange bird.” She decided early on that instead of trying to fit in, she would rather fight to figure things out on her own terms. She wanted to be an author, but couldn’t figure out how.

Torn between interest in psychology and love of learning, she settled on a BA in Education, which she completed in 1989. During her studies, she managed a night club, did band PR, and owned and operated an advertising sales company. By the end of 1990 (with friends and family questioning her judgment), she packed up and left her business to follow her heart. She was in love, and moved to Southern California with Walter Trout: an internationally touring (but penniless) blues rock guitarist, singer, song-writer, who had recently gone solo after a steady career as a sideman with five years each in Canned Heat and John Mayall’s band, the Bluesbreakers.

Shortly after landing on American soil, Marie started working as part of Walter’s touring crew, a position that gave her access to business elements of Walter’s career. Although he had a Top Ten hit in the Netherlands and was voted the sixth best guitarist in BBC’s 1993 Listener’s Poll, financial success did not follow the accolades. Marie gradually discovered that there were many irregularities with regard to management of Walter’s business, explaining why financial success seemed far off. Eventually, she had collected enough evidence: Walter was being robbed blind by people he trusted to run his business affairs for him.

After Walter and Marie’s first child was born in 1993, Marie took over as Walter’s manager, a position she still fills today. In 1996, after giving birth to their second son, she also took over as Walter’s agent in Europe. A third son followed in 2001. Marie enjoyed being active in business, but also being able to bring the children on tour, and at other times work from her home office providing continuity when Walter was on the road, and the children needed to be in school.

In 2012, she completed her MA along with being certified in Life Coaching. In 2015, she completed her PhD in Wisdom Studies, which allowed many components of Marie’s work, observations, and professional pursuits to come together. She credits her Major Advisor, Mark Ryan, a 20-year Dean at Yale University with providing structure and encouragement to finish her studies when her life fell apart in 2013. Walter was diagnosed with end-stage liver disease.

In 2014, Walter came close to death repeatedly. In a desperate, last-ditch effort to improve odds of Walter receiving a liver transplant Marie brought Walter to Nebraska for six months, leaving two still-at-home middle-and high school children with a caregiver in California. A steady support from Walter’s fans made the move financially (and emotionally) possible, and Marie is adamant that his survival was a community effort. During Walter’s illness, and after he recovered, she has advocated organ donation, appearing on several radio as well as TV news and talk-shows. This commitment continues in support of Donate Life campaigns, and Walter and Marie jointly serve as protectors for the Danish organization, Organdonation – Ja Tak.

Marie and Walter are determined to give back. All proceeds from The Blues – Why it Still Hurts so Good, will benefit the HART fund, which helps provide medical care for musicians facing a broad range of health concerns. Marie is no stranger to uncertainty, pain, and worry:


– I know what it is like to live the blues. Nobody is immune to suffering no matter how much they seek to insure and protect themselves. Like lightning from clear sky, our lives change and we are powerless to change it back. Nobody can avoid hardship and pain, but we can dare to reach out, and walk through it together with those who respond. I have walked through my blues for now and am constantly reminded to take nothing for granted. When I look around our world, I realize that by comparison, Walter and I have been fortunate. Walter is once again healthy and on the road with his awesome band, and I am once again busy managing his career. With a book coming out, and another one brewing in my head, I feel connected to, and in tune with, my life’s purpose. I am grateful.

http://www.marietrout.com/home/
Posted by Get the Funk Out! at 3:32 PM