Filmmaker Ethan Warren called in to KUCI 88.9fm to chat with Janeane about his debut film, West of Her!

“Enchanting and full of mystery.” – The Film Yap 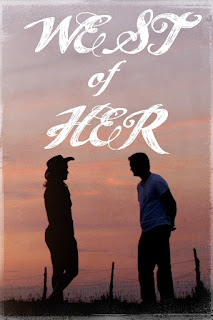 Filmed across ten states in three weeks in iconic American locations from the sweeping midwest plains to the majestic Rocky Mountains, the stark southwest desert to the busy streets of Memphis,WEST OF HER is a film for anyone who's ever longed for adventure, romance, and a life of meaning.

Alone and adrift in life, Dan signs on with a mysterious organization, agreeing to roam the country with an enigmatic stranger named Jane, working by night, laying small linoleum tiles in the streets of towns across America, each bearing the same cryptic message.

Dan feels like a jigsaw piece from the wrong puzzle, that the tiles represent something bigger, and that their mysterious employers know vital secrets, while Jane sees their task as a whimsical lark. Though Dan is an open book, Jane refuses to reveal anything about her life, or what she might know of their employers, who communicate only with her.

As they travel, growing closer even as they butt heads, Dan’s sincerity softens Jane’s cynical exterior. Their contentious relationship grows and deepens, changing both of their beliefs about what they're doing, until they're forced to choose between their work and the possibility of a future together.

WEST OF HER was written and directed by first-time filmmaker Ethan Warren. The film stars Ryan Caraway and Kelsey Siepser. It has a running time of 87 minutes. Gravitas Ventures will release the film on VOD and across all other digital platforms on February 6, 2018.

For more information and to view the trailer, go to: http://www.westofherfilm.com/
Posted by Get the Funk Out! at 8:50 AM