2/12/18 David Ihrig joined Janeane on KUCI 88.9fm to talk about acting and brain science, the Ihrig Approach and more! 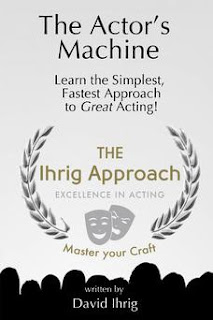 
About David Ihrig
MFA in Acting, Certified Practitioner
of NLP

WATCH the Science of Acting at UC Irvine -
Innovative UCI course blends neurobiology and the stage.


What can David Ihrig teach actors about acting?
That's a fair question, and an important one to answer before you invest your time or money learning his approach.

Quite unexpectedly, a jock from Northern New Jersey fell in love with the process of acting at a small state college in Southern New Jersey. There he studied The Meisner Technique with Gene Terruso. He continued in graduate school where he received a MFA in Acting from Northern Illinois University under the tutelage of Kathryn Gately. He subsequently moved to Chicago.

It was there he first experimented with organic rehearsal techniques while directing a staged reading of a short play. While sharing only the objective elements of the script, the actors were allowed to find the meanings in the story for themselves. The actors saw the script for the first time at the final run-though. It was the actors who insisted on performing the show off-book and staged. David was as surprised by the incredible success of that experiment as anyone.

Years later, while studying screenwriting in Southern California, David stumbled upon Neuro Linguistic Programming (NLP), which is the study of how language affects human behavior. He was introduced to Dr. Scott Kudia, a master trainer of NLP. The two combined their respective expertise and formed The Institute of Inner-Action, an acting studio that taught The Meisner Technique using the principles of NLP. Classes included Removing Emotional Blocks, Self Hypnosis for the Actor, and other classes developed specifically for the Institute. By all accounts, it was a very successful program. David noticed specific teaching techniques such as embedded commands, and learning feedback cycles, enabled students to assimilate acting principles at an accelerated pace. Dr. Kudia went on to work on television as a relationship expert, and the two amicably parted ways.

Ironically, one of the greatest breakthoroughs in the development of the approach occurred while teaching young actors in Manhattan Beach, California. While other children's acting classes focused on theater games, David wanted to teach young actors real principles of acting. He had to distill fairly complex ideas into a simple and understandable system. The result of organizing and simplifying all those years studying the principles of human learning and behavior is what is now, The Ihrig Approach.

https://www.theihrigapproach.com
Posted by Get the Funk Out! at 7:18 PM