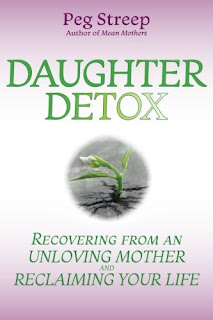 Peg Streep’s new book, Daughter Detox: Recovering from an Unloving Mother and Reclaiming Your Life (Île D’Éspoir Press) was just published and is available from Amazon.com. She has written or co-authored twelve books, among them Mean Mothers: Overcoming the Legacy of Hurt (William Morrow) and Quitting—Why We Fear It and Why We Shouldn’t—In Life, Love, and Work (Da Capo). Streep earned undergraduate and graduate degrees in English Literature from the University of Pennsylvania and Columbia University but is recognized as a research-based science writer. She is best-known for her work on the mother-daughter relationship, although she frequently writes on goal disengagement, verbal abuse, narcissism and narcissists, and brain science as well.

She’s been interviewed extensively on radio and television, as well as for print and online publications. You can find her at www.Facebook.com/PegStreepAuthor(link is external) or at www.pegstreep.com(link is external)


Peg Streep holds advanced degrees from the University of Pennsylvania and Columbia University and is author of many spiritual titles, including "Spiritual Gardening: Creating Sacred Space Outdoors," "Altars Made Easy: A Complete Guide to Creating Your Own Sacred Space," "Mary, Queen of Heaven," and "Sanctuaries of the Goddess: The Sacred Landscapes and Objects." She lives in a suburb outside of New York City where she devotes equal time to motherhood and writing.


ABOUT THE BOOK
A self-help book based in science, the result of more than a decade of research, Daughter Detox offers the daughters of unloving mothers vital information, guidance, and real strategies for healing from childhood experiences, and building genuine self-esteem. Writer Peg Streep lays out seven distinct but interconnected stages on the path to reclaim your life from the effects of a toxic childhood: DISCOVERY, DISCERNMENT, DISTNGUISH, DISARM, RECLAIM, REDIRECT, and RECOVER. Each step is clearly explained, and richly detailed with the stories of other women, approaches drawn from psychology and other disciplines, and unique exercises. The book will help the reader tackle her own self-doubt and become consciously aware of how her mother’s treatment continues to shape her behavior, even today. The message of the book is direct: What you experienced in childhood need not continue to hold you back in life. What was learned can be unlearned with effort.

The book begins with DISCOVERY, opening up the reader’s understanding of how she has been wounded and influenced by her mother’s treatment. Recognizing the eight toxic maternal behaviors—dismissive, controlling, emotionally unavailable, unreliable, self-involved or narcissistic, combative, enmeshed, or role-reversed—lays the foundation for the daughter’s awareness of how her way of looking at the world, connecting to others, and ability to manage stress were affected. DISCERNMENT delves into the patterns of relationship in her family of origin and how they played a part in her development, and then shifts to looking closely at how the daughter adapted to her treatment, either silencing or losing her true self in the process. Next up is DISTINGUISH, seeing how the behavioral patterns we learned in childhood animate all of our relationships in the present with lovers and spouses, relatives, friends, neighbors, and colleagues. The act of distinguishing allows us to see why so many of us end up in unsatisfying relationships, chose the wrong partners, or are unable to develop close friendships. Active recovery begins with DISARM as the daughter learns how to disconnect unconscious patterns of reaction and behavior and substitute actions that will foster the growth of self-esteem. Understanding the triggers that set us off, the cues that put us on the defensive, and the default positions of blaming ourselves and making excuses for other people’s toxic behavior are addressed, as are unhealthy behaviors such as rumination, rejection sensitivity, and more. RECLAIM is the stage at which the reader begins to actively make new choices, preparing herself so that she can live the life she desires by seeing herself as having agency and being empowered.

Making new choices and figuring out how to manage her relationship to her unloving or toxic mother is the focus of REDIRECT. There are stories to inspire and challenge your thinking, exercises that show you how to swap out self-criticism for self-compassion, guidance on how to use journaling as a tool of self-discovery and growth, and advice on goal setting. Finally, RECOVER challenges the reader to come up with a new definition of what it means to heal, suggests tools to overcome the obstacles she places in her own way, and strategies to become the best, most authentic version of herself.
Posted by Get the Funk Out! at 9:36 AM