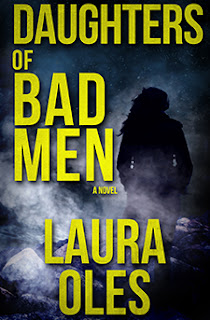 The book follows the story of skip tracer Jamie and her bulldog, Deuce, as Jaime tries to uncover the mystery behind her niece's disappearance. Unfortunately for Jamie, that means she has to confront family tension that she swore never to get involved with again. The book takes a fascinating look at family relationships as it weaves to the end in fast-paced-mystery style.

The book is set in a fictionalized version of Port Aransas, TX, a place where Laura spends a lot of time with her family, which was hit very hard by Hurricane Harvey.

In an interview, Laura will talk about:

Laura Oles is a photo industry journalist who spent twenty years covering tech and trends before turning to crime fiction. She has published over 200 articles in retail and consumer magazines and has served as a columnist for Digital Camera Magazine, Memory Makers Magazine, Picture Business, PhotoInduced, Cafe Mom) and others. Her book, Digital Photography for Busy Women, was named a photography category finalist in USA Book News.com’s ‘Best Books’ awards.

Laura’s short stories have appeared in several anthologies, including Murder on Wheels which won the Silver Falchion Award in 2016. Her debut mystery, Daughters of Bad Men, was a Claymore Award Finalist and will be released by Red Adept Publishing in November 2017. She is also a Writers’ League of Texas Award Finalist for Point and Shoot, which will be available next year.

Laura lives on the edge of the Texas Hill Country with her husband, daughter and twin sons. When she isn’t writing or working, you’ll find her serving as the family Uber driver or at her kids’ sporting events. After several years of watching soccer, she still can’t tell when a player is off sides. #itsastupidrule. She does, however, know a bad volleyball call when she sees it. #itwasdefinitelyout

She spends too much money in bookstores.