Vanderbilt professor and feminist philosopher Kelly Oliver is about to release the explosive series conclusion to her Jessica James mystery trilogy (which began with WOLF and COYOTE), in which our kickass heroine continues to tackle ripped-from-the-headlines issues like women's reproductive rights and autonomy: FOX (Kaos Press, May 1, 2017). In the series finale, Jessica and her friends are teaming up to combat the most insidious theft of all: the black market sales of Ivy League women's eggs. 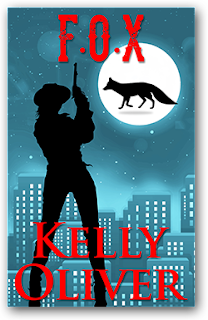 Her nonfiction work includes over 100 articles and over twenty books, including: Hunting Girls: Sexual Violence from The Hunger Games to Campus Rape. and she has been interviewed widely on television and in print media as an authority on modern feminism. She considers her genre when writing in fiction "millennial feminist noir." http:// kellyoliverbooks.com/

In an interview, Kelly can talk about topics such as:

Artificial reproductive technology
Her use of fiction to write in another platform about the serious subjects she cares about (as opposed to just publishing all nonfiction)
Feminism in crime fiction
The allure of mystery novels
And so many pop culture subjects we can't even count them!

Killer Genes Are No Accident.

When Jessica James wakes up half naked behind a dumpster in downtown Chicago, she thinks the hot intern feeding her Fiery Mule Slammers slipped her a Mickey. But after a pattern of similar incidents around Northwestern Research Hospital, Jessica realizes she wasn't raped, she was robbed. Robbed of something as valuable as life itself. Hunting for the predator drugging and dumping Ivy League co-eds, Jessica discovers secrets about her own identity that force her to rethink her past. The solution to the mystery lies in the cowgirl philosopher's boot-cut genes.

The "dumpster girls" are all top of their class, attractive, college girls, who are drugged and dropped behind dumpsters, with tiny mysterious incisions on their bodies. The police are baffled. When a girl turns up dead, armed with her quick wit, cowgirl grit, and philosophy, it's up to Jessica to solve the mystery to save herself and her friends before they become the next victims.

"Stoner" Jack Grove, a third year medical student studying abnormal psychiatry at Northwestern University, and one of Jessica's bestfriends, secretly has a crush on her. While Jack is trying to understand the criminal mind, his classmate and rival, Max White, is trying to eliminate it through genetic engineering. Competing for Jessica's attention, Jack and Max become the primary suspects in the series of "dumpster girls."

Olga Davis, the trophy wife of business mogul and aspiring Senator Ronald Davies, is under pressure to get pregnant, she resorts to IVF ata fertility clinic run by Max White. When five embryos attach and are viable, Olga faces the toughest decision of her life. Trying to keep her "unnatural"pregnancy a secret, and obsessed with finding out the identity of the biological parents, Olga must steal from her husband, and pay off a blackmailer threatening to expose her.


In Kelly Oliver's stunning page-turner, Jessica, Jack, and Olga are fighting not just for their own lives, but also for the very future of human life.


Kelly Oliver is the author of THE JESSICA JAMES COWGIRL PHILOSOPHER MYSTERY novels, including WOLF, COYOTE, and the forthcoming FOX (2017). She earned her Ph.D. from Northwestern University in philosophy. She has held teaching positions at various Universities, including George Washington University, University of Texas at Austin, and Stony Brook University. Currently, she is W. Alton Jones Distinguished Professor of Philosophy at Vanderbilt University. Her work has been translated into seven languages, and she has published in The New York Times. She has been interviewed on ABC television news, various radio programs, and is a member of Mystery Writers of America and Sisters in Crime. Her nonfiction work includes over 100 articles and over twenty books, including: Hunting Girls: Sexual Violence from The Hunger Games to Campus Rape.


Kelly Oliver grew up in the Northwest, Montana, Idaho, and Washington states. Her maternal grandfather was a forest ranger committed to saving the trees, and her paternal grandfather was a logger hell bent on cutting them down. On both sides, her ancestors were some of the first settlers in Northern Idaho. In her own unlikely story, Kelly went from eating a steady diet of wild game shot by her dad to becoming a vegetarian while studying philosophy and pondering animal minds. Competing with peers who'd come from private schools and posh families "back East," Kelly's working class backwoods grit has served her well. And much to her parent's surprise, she's managed to feed and cloth herself as a professional philosopher.

When she’s not writing Jessica James mystery novels, Kelly Oliver is a Distinguished Professor of Philosophy at Vanderbilt University. She earned her B.A. from Gonzaga University and her Ph.D. from Northwestern University. She is the author of thirteen scholarly books, ten anthologies, and over 100 articles, including work on campus rape, reproductive technologies, women and the media, film noir, and Alfred Hitchcock. Her work has been translated into seven languages, and she has published an op-ed on loving our pets in The New York Times. She has been interviewed on ABC television news, the Canadian Broadcasting Network, and various radio programs.

Kelly lives in Nashville with her husband, Benigno Trigo, and her furry family, Hurricane, Yukiyu, and Mayhem.
Posted by Get the Funk Out! at 7:33 PM