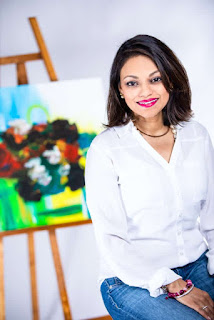 Nita Patel’s life of art began upon hearing the fable of the Balinese dragon, the Naga who claims to protect its people during the day and descends the ocean at night to see his true love, the Pearl. John Hardy’s Naga collection sparked her desire for creative expression and she began creating Asian inspired art, later evolving to incorporate her spirituality and ideation of love depicting both direct and indirect interpretations. Her abstract work embodies the unknowns we struggle to untangle where enlightenment is the only way out. Sharing her creative interpretations with others is her way of passing the message forward.

Nita is best known for her multi-media work in which she exploits an array of mediums – from the more typical oil and acrylics upon canvas, wood, rice paper and glass, to her uniquely clever and masterful utilization of precious materials such as diamonds, gold, and other exotic constituents. Her use of precious materials signifies the ounce of hope that gives us strength to carry us through the dark moments.

Further, in her expression of care towards those she engages, Nita leverages her corporate experience and her formal psychology education offering guidance to those who embark on their journey towards fulfillment.

Born in Croydon, UK, Nita traveled frequently between London and Dallas during her childhood, attending elementary school in both countries. Her formative years were influenced not only by the American and English cultures, but also by her parents’ South Asian Indian and African origins. Being an amalgam of values and mores helped to formulate her strong and resilient character as an artist.

Nita shows her work in the UK and US. She is currently based in Dallas.


Just in time for the series finale of Game of Thrones, artist Nina Patel is attracting the interest of fans of the show.Although often passionately abstract in her work, Dallas-based artist Nita Patel’s recent Dragon Series was inspired by a fable about a Balinese dragon, the Naga.Rather than a fearsome Game of Thrones-style monster, the Naga is dedicated to protecting people by day, descending into the deep sea by night to visit its true love, a pearl.In the same way, Nita offers her growing audience compositions of great beauty, designed to reconnect them to both emotional and spiritual truths. In fact, she begins each of her works by inscribing “love" across the base in various forms. For the Dragon Series, she also uses a perfectly square piece of glass to represent the heart, something she feels “might be broken but is still somehow always whole.”

Using everything in her work from paint and canvas to wood and rice paper, Nita has masterfully incorporate glass and precious materials such as gold and diamonds into her work. She finds a deep sense of satisfaction in the 3-D nature of her mixed media creations, as well as the spontaneous and free creative process behind them.Another popular mixed media series of hers, this one based on heart images,debuted this January in NYC.Nita’s inspiration for the Dragon Series began with a gift during a difficult period in her life,specifically a John Hardy bracelet. This gift led her down the path of researching the dragon legend and inspired her to create her own images.

For Nita, the dragon story not only gave her a much-needed sense of protection but also a new means to channel her artistic impulses creatively without intellectualizing them. Working spontaneously, she created dragon images that represented what she feels are the grounding principals of our shared humanity: love, protection, and inner balance, without which life is merely chaos.A truly international artist, Nita was born in Croydon, UK, and traveled frequently between London and Dallas during her childhood. She is influenced deeply by both cultures, as well as her parents’South Asian Indian and African origins.Now based in Dallas, Nita Patel’s work has been shown throughout the world, including exhibits at the Louvre, Art Basel Miami, the Museum of International Arts in Turino, the BridgehamptonMuseum, and most recently in NYC at the Saphira Ventura Gallery.
Her Bracelet Story:
I was going through an early mid-life crisis trying to understand my place in life among the many “why’s” of life, seeking answers to questions I had never crossed before, almost to the point of questioning my existence.During that time, I received a John Hardy bracelet as a birthday present.Not knowing the significance to the bracelet or the designer, I googled it and read about the Naga collection and the story of the dragon.This was particularly inspiring as the story read the Dragon protected its people during the day and descends the ocean to see his true love, the pearl.I immediately connected with this despite my strong sense of spirituality. It gave me a strong sense of protection through this uneasy period and a means to channel my energy as I without planning or thought started creating variations of these beautiful beings.Soon thereafter, I created hearts and yin-yang in the same fashion.I believe the idea was the same, but as I analyzed it after the fact, I understood this all came back to basic grounding principles of humanity:love,protection, inner balance (w/o it, there’s nothing but chaos).As I further explored these concepts, it led me to painting abstracts.I could touch, feel, share, and connect with others through
Find Nita on www.Nita-Patel.com
Posted by Get the Funk Out! at 11:33 AM