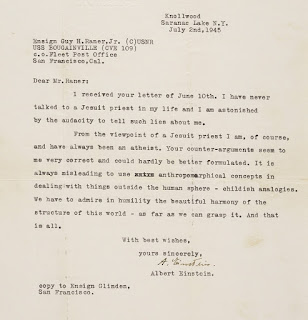 
New York- Bonhams announces the seventh installment collector Eric C. Caren's voluminous collection of How History Unfolds on Paper, an online-only sale from March 6-14, with an exhibition in the New York galleries March 7-11. The collection begins in the 17th century and covers 4 decades of American and world history, focusing primarily on letters, documents, and printed media.

Highlighting the sale is an Albert Einstein letter written to a young U.S. Naval Officer near the end of World War II (estimate: $100,000-200,000). The young man had written to Einstein relaying a conversation he'd had with a Jesuit priest who claimed he had convinced the scientist to believe in a "supreme intellect which governs the universe." Rather than his usual cagey response, Einstein admits that he has always been an atheist, but that the world is indeed wondrous: "We have to admire in humility the beautiful harmony of the structure of the world--as far as we can grasp it. And that is all." The letter includes its original envelope, and copies of the original outgoing correspondence.

From America's pre-Revolutionary War period, two highlights include examples of patriot Paul Revere's artwork: a first issue of his famous engraving of Boston Harbor, published in a 1770 Boston almanac (estimate: $15,000-25,000); and a rare variant of his even more famous engraving of the Boston Massacre showing British soldiers firing on American colonists (estimate: $8,000-12,000).

An important Revolutionary War highlight is the military commission appointing Benjamin Lincoln as Major General of the Army of the United States, signed by John Hancock as President of the Continental Congress (estimate: $60,000-90,000). Issued in February 1777, the appointment was signed at Baltimore during the brief window of time that city served as the nation's capital. Interestingly, this appointment as Major General (one of 5 suggested by George Washington), provoked jealousy and outrage in Benedict Arnold, who was not one of the 5 promoted, and who nursed a grudge which likely led him to betray his country a short while later.

Further highlights include reportage of Alexander Hamilton's duel with Aaron Burr, providing both an account of the tragic event and printing the correspondence exchanged between the two in the run up. Most devastatingly for Burr, the paper prints Hamilton's message to his family, in which he announces his intention to throw away his shot (and make Burr look the villain) (estimate: $3,000-5000); two remarkable broadsides from the War of 1812: a Baltimore paper's first hand account of the bombardment of Fort McHenry (estimate: $8,000-12,000), and a rare, early printing of the full lyrics of the "Star Spangled Banner" (estimate: $8,000-12,000).

From the realm of sports, the collection offers the earliest known newspaper coverage of Babe Ruth (estimate: $6,000-9,000). In an April 4, 1914 issue of the Baltimore News, as the Babe's first professional season with the Orioles got underway, the newspaper emphasized the young player's prowess as a pitcher, not a batter, reporting that the "St. Mary's schoolboy is going to do plenty of twirling." Not long after this story appeared, Ruth was traded to the Red Sox, who would infamously trade him to the Yankees after only 2 years.

Bonhams, founded in 1793, is one of the world's largest and most renowned auctioneers, offering fine art and antiques, motor cars and jewellery. The main salerooms are in London, New York, Los Angeles and Hong Kong, with auctions also held in Knightsbridge, Edinburgh, Paris, San Francisco and Sydney. With a worldwide network of offices and regional representatives in 22 countries, Bonhams offers advice and valuation services in 60 specialist areas. For a full list of forthcoming auctions, plus details of Bonhams specialist departments, please visit bonhams.com. #bonhams
Posted by Get the Funk Out! at 3:05 PM