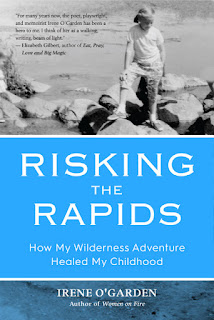 What Others are Saying About Irene O’Garden’s Risking the Rapids (there are numerous other wonderful reviews!)


For many years now, the poet, playwright, and memoirist Irene O'Garden has been a hero to me. I think of her as a walking, writing, beam of light. It is my hope that ...numberless others will come to know her gifts and, most of all, her captivating talent for wonder and marvel. —Elizabeth Gilbert, author of Eat, Pray, Love and Big Magic

“Family is landscape,” writes Irene O’Garden in her breathtaking memoir, Risking the Rapids. She gives us a bold dose of both as she embarks on a remote river trip to help make sense of a family wild and dangerous. In her brave eloquence, O’Garden adds a thoroughly welcome voice to the rich vein of American literature on the singular healing powers of wilderness. —Florence Williams, author of The Nature Fix, LA Times Book Prize winner and editor at Outside Magazine Risking the Rapids is a deep and powerful memoir.

Irene O’Garden sifts through her family’s shared pain (and shared joy!) with elegance and care — searching for nothing less than ultimate understanding and supreme forgiveness.” —Martha Beck, Bestselling author, columnist for O, The Oprah Magazine

Irene O’Garden has won or been nominated for prizes in nearly every writing category from stage to e-screen, hardcovers, children’s books as well as literary magazines and anthologies. Her criticallyacclaimed play Women on Fire (Samuel French), starring Judith Ivey, played to sold-out houses at Off-Broadway’s Cherry Lane Theatre, and was nominated for a Lucille Lortel Award. Her new play, Little Heart, won her a Berilla Kerr Playwriting Fellowship and was awarded full development at the New Harmony Play Project. O’Garden was awarded a Pushcart Prize for her lyric essay “Glad to Be Human,” (Untreed Reads.) Harper published her first memoir Fat Girl and Nirala Press recently published Fulcrum: Selected Poems, which contains her prize-winning poem “Nonfiction.”

On January 31, 2019 O’Garden’s upcoming memoir, Risking the Rapids: How My Wilderness Adventure Healed My Childhood is being published by Mango Publishing. O’Garden’s poems and essays have been featured in dozens of literary journals and awardwinning anthologies (including A Slant of Light, USA Book award Best Anthology), and she has been honored with an Alice Desmond Award and an Oppenheimer for her children’s books. A seasoned and entertaining presenter both on stage and video, O’Garden has appeared at top literary venues: including The Player’s Club, the Bowery Poetry Club, Nuyorican Poetry Café, and KGB in Manhattan; The Poetry Café, Mycennae House and Vinyl Deptford in London, and all throughout the Hudson Valley. She’s a regular contributor to 650―Where Writers Read, in New York City and Sarah Lawrence College and has received several grants from Poets and Writers. 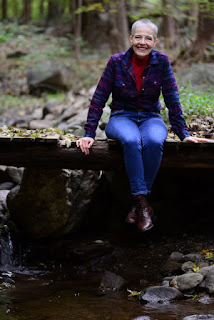 Irene also presents to an audience of hundreds annually at the Global Seth Conference. O’Garden has presented at children’s literature conferences at Vassar and NYU and teaches poetry workshops at New York City schools. She is especially pleased to bring the national River Of Words program to Hudson Valley schools under the auspices of The Beacon Institute of Rivers and Estuaries. O’Garden is a proud member of The Dramatists Guild, The Authors Guild, Actor’s Equity Association, The Society of Children’s Book Writers and Illustrators, and The Society of Scribes. Irene O’Garden has lived joyfully with her husband John Pielmeier for over 40 years. Pielmeier, who is most known for his play Agnes of God, also writes movies and miniseries for television. In 2018 Scribner published his first novel, Hook’s Tale, and his stage adaptation of The Exorcist played London’s West End and will open in New York this year. They live and write in Garrison, NY.

ireneogarden.com
Posted by Get the Funk Out! at 12:26 PM