On 7/3, Janeane Bernstein chats with Sarah Dessen, the beloved #1 New York Times bestselling author of Young Adult fiction and Once and For All 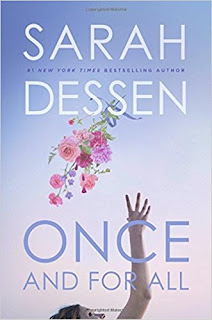 With more than 10 million copies in print, Sarah Dessen is the undisputed queen of summer romance and her thirteenth novel, ONCE AND FOR is the best one yet. Set in the world of wedding planning, ONCE AND FOR ALL is inspired by those momentous occasions in life which can challenge one’s personal resources and ultimately bring out the best in ourselves and the friends and family around us. Sarah Dessen is the author of twelve previous novels, and her first two books, That Summer and Someone Like You, were made into the movie How to Deal, starring Mandy Moore. Dessen’s books are frequently chosen for the Teens’ Top Ten list and the list of Best Fiction for Young Adults.

This past January, Sarah Dessen was awarded the highly coveted 2017 Margaret A. Edwards Award at the American Library Association Youth Media Awards. Each year the American Library Association awards this honor to an author for his or her significant and lasting contribution to young adult literature. As a recipient of this award, Dessen stands alongside past recipients and young adult literature powerhouses S.E. Hinton, Judy Blume, and Laurie Halse Anderson among others.

About ONCE AND FOR ALL:

Is it really better to have loved and lost? Louna's summer job is to help brides plan their perfect day, even though she stopped believing in happily-ever-after when her first love ended tragically. But charming girl-magnet Ambrose isn't about to be discouraged now that he's met the one he really wants. Maybe Louna's second chance is standing right in front of her. Sarah Dessen’s many fans will adore this latest novel, a richly satisfying, enormously entertaining story with humor, romance, and an ending that is so much more than happily-ever-after.

Read an excerpt from ONCE AND FOR ALL on EW.com: Sarah Dessen’s YA novel Once and for All

Sarah Dessen is the author of twelve previous novels, which include the New York Times bestsellers Saint Anything, The Moon and More, What Happened to Goodbye, Along for the Ride, Lock and Key, Just Listen, The Truth About Forever, and This Lullaby. Her first two books, That Summer and Someone Like You, were made into the movie How to Deal. Dessen’s books are frequently chosen for the Teens’ Top Ten list and the list of Best Fiction for Young Adults. They have been translated into twenty-five languages. Sarah Dessen graduated from the University of North Carolina at Chapel Hill. She lives in Chapel Hill with her husband, Jay, and their daughter, Sasha Clementine.


Praise and Accolades for Saint Anything:

· "A poignant, honest story . . . Is there anyone who can write about what matters most to teens as well as Dessen can? I sincerely doubt it." – Jodi Picoult,New York Times bestselling novelist of Leaving Time and My Sister's Keeper

· ★ "Once again, Dessen demonstrates her tremendous skill in evoking powerful emotions through careful, quiet prose, while delivering a satisfying romance. The author's many devotees are sure to enjoy this weighty addition to her canon." – Publishers Weekly, starred review