Monday June 12 Guitarist Gary Pihl of the band BOSTON spoke with host Janeane Bernstein about his current "Hyper Space Tour - Where No Band Has Gone Before" kicking off across the country with JOAN JETT & THE BLACKHEARTS! Learn more about the tour on www.bandboston.com! 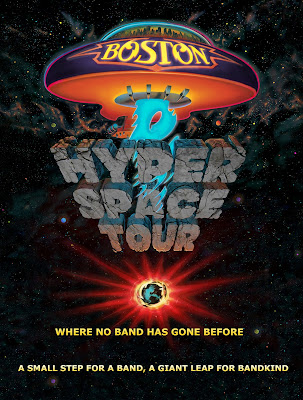 
with JOAN JETT & THE BLACKHEARTS! 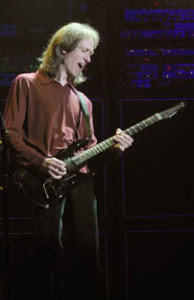 Gary does it all: guitars, work in the recording studio, live shows on the road and the architect of the band BOSTON website. He'll provide backup vocals on the 2016 40th Anniversary BOSTON tour. He has been a member of BOSTON since 1985 and is the longest recurring member of Tom Scholz' recording and touring band. GARY PIHL (pronounced "Peel") Raised in the suburbs of Chicago for the first 12 years of his life, Gary Pihl relocated to the San Francisco Bay area
and has led a musical life ever since. He explains, “I was in several bands in high school. One of our guitar players told me about a guy who was really good and giving guitar lessons at the local music store. He was in a band named The Warlocks.

We went to see them play at a local pizza parlor. A couple months later they changed their name to the Grateful Dead. The guitarist giving us lessons was Jerry Garcia.” At 19, Gary had his recording debut with Day Blindness in 1969. He says, “After my time in Day Blindness, I was in a band called Fox with Roy Garcia and Johnny V (Vernazza), who went on to play in Elvin Bishop’s band. We were really fortunate to get to be on some shows with bands we looked up to including opening at the Fillmore for Free (with Paul Rogers). We were on shows with Janis Joplin, Quicksilver Messenger Service, Eric Burdon and War and Mose Allison.”

Gary spent four years in a band called Crossfire. He recalls, “Mitchell Froom was our organist. He’s gone on to be a great producer (Paul McCartney, The Pretenders, Los Lobos, Crowded House, Suzanne Vega, Sheryl Crow, etc.). We were opening some shows for Norman Greenbaum (Spirit in the Sky) when he was performing as a singer/songwriter on acoustic guitar. We had done our set and left the stage to Norman.

He was halfway through his set when we noticed the audience was getting restless and wanted him to rock out. In the middle of one of Norman’s songs, our drummer, Steve Jones, got back on stage and started playing! Norman turned around in shock. Then he looked at the rest of us on the side of the stage and waved us up. We’d seen him about a half dozen times so we sort of knew his songs. Mitchell and his brother David (our pianist) have perfect pitch and were telling me and our bassist what the chords were as we went along. The crowd seemed to dig it and we ended the show with a rocked out version of Spirit in the Sky.”

As it turned out, I flew directly from Farm Aid (my last gig with Hagar) to Boston, so I wasn’t out of work for a day. I thought, how lucky could a guy get? He told me that there would probably be some touring involved if the album did well, which it did and basically I’m still here.” Tom and Gary traded studio leads on “I Think I Like It,” a high-energypower tune that showcases how well these two virtuosos complement one another. The two of them, who could pass for brothers, are a natural pair on stage. In addition to lead guitar, Gary also plays electric and acoustic 12-string guitar, keyboards, as well as lends backing and harmony vocals. 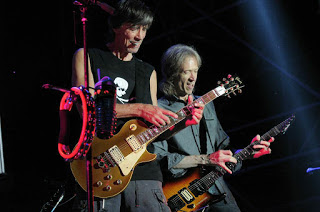 Gary quickly became indispensable to Tom’s BOSTON efforts. This quintessential multi-tasker has been Scholz’s right-hand man for over 20 years, serving as Vice President of Scholz Research and Development, assisting in building Tom’s Hideaway Studio II, and is a crucial part of the massive technical undertaking of managing the stage equipment on a BOSTON tour, including all of the
back line and audio equipment.

He also manages tech people, teaches band performers their parts, organizes rehearsals, integrates the “front of house” sound company system and personnel. Scholz wouldn’t tour without Pihl, saying, “I’d be lost without him. Gary’s the only other person on tour that has a thorough understanding of the complex audio productions systems that turn the efforts of 7 musicians and singers into the perfectly mixed stereo sound coming out the the sound system. That includes everyone, the road crew and the sound reinforcement technicians.”

As Kimberley Dahme puts it, “In my opinion, he is the glue that holds BOSTON together. He works with us individually for hours on end, and assists Tom solving all of the problems that come up. He cares. I am so thankful to him, he is amazing. I don’t have enough good things to say about Gary.” Pihl is an expert professional photo editor, and did all of the editing for the graphics that were required for Corporate America as well as the remastered Boston and Don’t Look Back CD’s.

He’s one of those rare people that has a gift for music and highly technical talents,” states Tom. Drummer Jeff Neal adds, ” Gary is the most consistent player out there, night after night, you can count on Gary to bring his ‘A’ game. His style is really an excellent blend of great technical ability but also wonderful feel. It ‘ s a standard that young players today should aspire to reach.” Although the majority of his talent is innate, some was acquired. Gary explains, “My dad always told me to do whatever you want, be the best you can and go to school to learn how. I reminded him that they don’t teach Rock and

Roll in college but he said, ‘If you love music, then find out all you can about it.’ He took me to the local college and made me sign up. Of course once I got started, I loved it. No, they didn’t teach Rock and Roll, but it gave me a great foundation and a better understanding of music. In one of my choral classes I was sitting next to another kid out of high school just trying to learn about music. It was Johnny Colla, who went on to play sax with Huey Lewis and the News. You never know who you’ll end up sitting next to in school.”

In addition to his BOSTON ventures, he still finds time to let his creative energy fly. He says, “I’ve enjoyed working with some friends on a “project band” called Alliance. It’s Dave Lauser from Sammy Hagar’s band, Alan Fitzgerald from Night Ranger, and Robert Berry from 3. It’s a mix of all our favorite styles from Blues to Prog rock.” Alliance has released three albums to date. “Robert Berry and I are also in a band called December People. We do traditional holiday songs but in the style of different rock bands. We do Joy to the World as if the Who were playing it, Santa Claus is Coming to Town like ZZ Top might play it. You get the idea. It’s a lot of fun and every show we do is a benefit for a local charity, usually a food bank.” A long-time vegetarian like the late

Brad and Tom Scholz, Gary resides in a suburb of Boston with his wife and two sons.


Five Things You May Not Know About Gary Pihl:

1.Award winning photographer.
Someone told me that the Sonoma County Fair had an arts competition and photography was one division. I entered three of my photos and one took First Place (black and white landscape) and another placed third (kids and cows).


2. Took guitar lessons from Jerry Garcia
I was a teenager when the other guitarist in my band recommended a guitar teacher in the next town who was in a band called the Warlocks. We took some lessons from him and saw his band play at Magoo's Pizza Parlor. They soon changed their name to the Grateful Dead and Jerry stopped giving lessons.

4. Climbed to the top of Half Dome in Yosemite park at age 60.
I've been to Yosemite National Park many times but never considered something as difficult as climbing the iconic peak of Half Dome until I read that there was a trail to the top. I figured I'd better do it while I still can. It was the longest and highest trek I've ever done.

5. Plays guitar with December People where we do Christmas songs in the styles of classic rock bands for food bank charities.
I get together with other guys from famous bands and play songs like "Santa Claus is Coming To Town" as if ZZ Top had written it, "White Christmas" like Billy Idol's "White Wedding", etc. Lots of fun for a good cause.