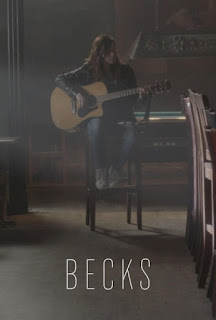 Inspired by the life of singer/songwriter Alyssa Robbins, Becks is not just a lesbian love story, but a universal love story first and foremost that speaks to the broader human experiences of love, heartbreak, and finding one’s place in this world.

BECKS, follows an unambitious musician (Becks) who moves back home to St. Louis after a crushing breakup with her longtime girlfriend Lucy (Hayley Kiyoko). Once back home, she struggles to find a connection with her ultra-Catholic mother Ann (Christine Lahti), a former nun. As she navigates her hometown, playing for tip money in an old friend's bar, an unexpected relationship begins to take shape with Elyse (Mena Suvari), the wife of Becks’ high school nemesis. The film is driven by an original soundtrack produced by veteran music producer Steve Salett and performed by Lena Hall.


The film was co-directed by Liz Rohrbaugh (Emmy Award Winner and documentary director of The Perfect Victim) and Daniel Powell (Emmy and Peabody winning co-creator and Executive Producer of Inside Amy Schumer) and written by both directors in collaboration with Peabody winner, four time Emmy nominee for Key and Peele and producer of FX’s Baskets, Rebecca Drysdale.

Tony winner and Grammy nominee Lena Hall is currently starring in Lincoln Center’s How To Transcend a Happy Marriage to rave reviews. Previously she starred as both ‘Hedwig’ and ‘Yitzak’ in Los Angeles and San Francisco with Hedwig and the Angry Inch. Prior to that Lena starred as ‘Nicola’ in the Tony Award winning musical Kinky Boots.